Another degree, and a passion realized 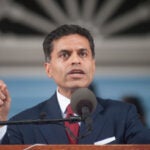 Musinsky used an illness to inspire her artistry

Bridging the visual arts, dance, and animation, Catherine Musinsky ’86, a graphics assistant with the Museum of Comparative Zoology, will process for Harvard again this month.

She earned her undergraduate degree in East Asian languages and civilizations. Now, Musinsky is a digital media arts and sciences concentrator in the Extension School’s master of liberal arts program in information technology. Her thesis, a 3-D reconstruction of skeletal and muscle movement for a kinetic and functional study of chewing in herbivores, combines her scientific focus with a lifelong love of movement and art.

“Animation fascinates me because I’m a dancer, so I’m always moving,” said Musinsky, who also holds an M.F.A. degree from the Tisch School of the Arts. “I’ve been obsessed with dance ever since I was a kid, and still am.”

One of Musinsky’s greatest challenges may have been how she has overcome illness by transforming a devastating experience into art. In 2006, she was diagnosed with Stage III breast cancer. The life-threatening illness led to intense treatment, including a mastectomy and reconstructive surgery, as well as several months of chemotherapy and radiation.

Just a week before her surgery, Musinsky performed a dance with Lorraine Chapman The Company. “It was both a ritual preparation for the surgery and the chemical rite of passage I was about to go through,” she said.  “All told, I went through about 18 months of treatment, and I just wanted to be still — not eat, not move, just be still. It was as close to being dead as I have ever felt.”

After her treatment, Musinsky struggled to come to terms with her life and body, and to find a new concept of normal. A friendship with documentary filmmaker Brynmore Williams, a multimedia and digital video specialist with the Division of Continuing Education, prompted her to embark on a film project.

Inspired by the SCAR Project, a series of photographs of semi-nude women who have had mastectomies or lumpectomies, Williams envisioned a film that would focus on Musinsky and her relationship with her body after surviving cancer. The film could aid breast cancer awareness. “I was very shy about my mastectomy and reconstructive surgery,” Musinsky said. “So I asked Genevieve Levin, a henna tattoo artist, to come and do a design on the breast that had been surgically reconstructed.”

The four-minute documentary film focused on the application of the henna tattoo, and a subsequent semi-nude dance performance by Musinsky. “Unchastened” has won numerous awards on the film festival circuit.

“To be honest, I never really understood public nudity,” Musinsky said, laughing. “I thought people should generally keep their clothes on, and I didn’t really want to be ogled. But this project had nothing to do with that. This was about something that I was struggling with, something that I was ashamed of, and how revealing what’s hidden can take that shame away. It was really about finding acceptance with my body as it now was.”

For Williams, the film’s success is directly linked to Musinsky’s openness, honesty, and vulnerability. “The fact that she surrenders so much on film prompts very revealing conversations among audience members who have dealt with breast cancer themselves,” he said. “They feel comfortable to share their own perspectives and anxieties, tell their own stories, and celebrate what they have. The most powerful thing is that, in a way, the film has helped people to see that there’s light at the end of the tunnel.”

As Musinsky prepares — for a second time — to process in Harvard’s Commencement ceremony, she might just break into a few dance steps. “When you hear music, your body just starts to move,” Musinsky said. “When I don’t dance, I feel less human. There’s no way, at least for me, to keep still.”