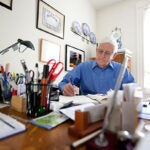 Where the magic happens

‘Porgy,’ its own production, and ‘Once,’ garner 21 nominations

When Diane Paulus heard that her production “The Gershwins’ Porgy and Bess” garnered 10 Tony Award nominations, she burst into tears. Then she got back to business.

The American Repertory Theater’s (A.R.T.) indefatigable artistic director was on the early morning train to Manhattan to attend auditions for the theater’s upcoming production of Tennessee Williams’ “The Glass Menagerie” when the text messages started pouring in and the nominations started piling up, including one to Paulus as best director, and one to “Porgy” as best revival of a musical.

“I was texting back, ‘Are you sure?,’ ” said the director, who started to cry, but then promptly began trying to sell season tickets to her seatmate, a resident of a Boston suburb who was lamenting his lack of engagement with the theater.

“It was a classic moment,” she said. “There I was, selling him a subscription to the A.R.T.”

Even before “Porgy” premiered, Paulus had drawn criticism from veteran composer Stephen Sondheim for tinkering with the classic. But she persevered with her vision, with approval from the Gershwin estate and the help of Pulitzer Prize-winning writer Suzan-Lori Parks and two-time Obie Award winner Diedre Murray. She also had support from stars Audra McDonald and Norm Lewis, who both eventually earned Tony nominations for their performances. The show premiered at the A.R.T. last fall before moving on to Broadway.

“We never thought we would encounter the ride that we ultimately went on. This moment is just a very happy part of that ride, and is a tribute to the team’s work,” said Paulus in praise of her collaborators. “For me, as a director, there is nothing more gratifying than having your team recognized.”

Paulus was also thrilled that another production with ties to the A.R.T. garnered a slew of Tony nominations. British theater director John Tiffany, who was a fellow at Harvard’s Radcliffe Institute for Advanced Study last year, workshopped his musical “Once,” based on the low-budget hit film about a pair of aspiring musicians, at the A.R.T. last year. The show received 11 nominations.

Tiffany is the associate director of the National Theatre of Scotland, a nomadic production company that likes to stage shows in unlikely locations such as a museum, a ferry, and a forest, in keeping with its motto: “Theatre without walls.”

He connected with Paulus while at Radcliffe, and the two directors, who both love breaking theater’s boundaries, became fast friends. “I have admired his work for years,” said Paulus. “He shares a very passionate feeling about theater as an event, and audience.”

While at Harvard, Tiffany had directed a show with students from the American Repertory Theater / Moscow Art Theater School Institute for Advanced Theater Training at Harvard University, and Paulus encouraged him to bring his work-in-progress “Once” to Cambridge for fine-tuning. Tiffany polished the production at Oberon with a mix of performers from the institute and professional actors.

As a result, institute student Erikka Walsh went on to Broadway as a member of the cast, and the A.R.T.’s sound designer and engineer Clive Goodwin received a Tony nomination for the best sound design of a musical for his work.

“Nothing made us happier than seeing that show so deeply recognized as well,” said Paulus. “It was this amazing day for the A.R.T.”

The dynamic director, who will direct “The Glass Menagerie” next February, is quick to draw a connection between the Tony nominations and Harvard President Drew Faust’s commitment to the arts. “I feel so strongly the recognition A.R.T. received is truly a tribute to the level of artistic work being done at Harvard University,” Paulus said, “and the support and the commitment that this University shows to excellence in the arts.”

After her first brush with the Tonys — Paulus’ hit revival of “Hair” won the 2009 Tony for best revival of a musical — she knows what to expect of the awards ceremony.

“It’s kind of surreal,” she said of the show, which lasts for several hours and employs seat fillers, people who rush to sit in an empty seat when its occupant gets up so the viewers at home see a theater that is perpetually full. She also knows to arrive prepared, thanks to the famed British director Phyllida Lloyd, who sat behind Paulus in 2009 with plenty of treats to ward off hunger.

“She told me,” said Paulus, “you have to bring snacks.”