A poem for Harvard 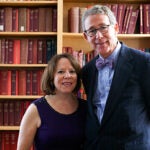 Seamus Heaney will reprise a favorite villanelle, written for 350th

Seamus Heaney was awarded the Nobel Prize in literature in 1995. He was teaching at Harvard that year, as he had been, one way or another, since 1979.

Today — bluff and kind and 73 — Heaney will be back at Harvard, on hand from Dublin to read a poem at Morning Exercises. As Harvard celebrates its 375th anniversary, he will reprise his 1986 “Villanelle for an Anniversary,” composed for the University’s 350th.

The villanelle relies on the rhetorical power of repetition, in this case, alternate rhyming refrains lifted from the first stanza. “There’s a kind of bell-ringing quality to the villanelle,” said Heaney in a trans-Atlantic interview, “which makes it easy on the ear.” The 19-line anniversary poem has two repeated lines. The first is “A spirit moved. John Harvard walked the yard.” The second reads, “The books stood open and the gates unbarred.”

Heaney remembered writing just two poems during his years at Harvard, semesters when he taught and read a lot. “I tended to regard the Harvard stint as a kind of executive moment in life,” he said. “Your public self was on.”

The two poems were the anniversary villanelle and “Alphabets,” composed for the Phi Beta Kappa Literary Exercises in 1984. “Traditionally the Phi Beta Kappa poem is about learning,” he said. “So mine was [about] making the first letters at primary school.”

“Alphabets” is a tribute to reverie, childhood, longing, and to graduated learning. Over time, letters on a slate become boyhood Latin and then become a poet’s alphabet of the real, a “new calligraphy that felt like home.”

“The letters of this alphabet were trees. / The capitals were orchards in full bloom, / The lines of script like briars coiled in ditches.”

Heaney has read the anniversary poem a few times since 1986, but only once to 20,000 people. The repeating lines make the villanelle handy for reading over loudspeakers, he said. “If you’re going to read a poem in the open air, over large speakers, to large crowds, make sure it’s very clear.”

Heaney began teaching at Harvard as a visiting professor in 1979, was elected Boylston Professor of Rhetoric and Oratory (1984-95), and eased into a final Harvard rhythm as the Ralph Waldo Emerson Poet-in-Residence, a post he held until 2006. During all his part-time residences at Harvard, he lived in Adams House. “The arts and bohemia were represented there,” he said. “It was a desired address.”

Every semester-long visit began the same way, said Heaney: “Go straight to Adams House, set up, and then go straight to the bookshops.” Then he always stopped at One Potato, Two Potato, a modest restaurant on Massachusetts Avenue that is no longer there.

Then there was Heaney’s fondly recalled, physical Harvard. “I still remember the excitement of driving along Storrow Drive and seeing the outlines of the Houses,” he said, “which was a kind of moment I would remember always.” Some evenings Heaney would slip away to smoke a cigar outside Apthorpe House on Plympton Street. And he enjoyed a few quiet corners at Harvard, the library at Adams House, for one, and the Woodberry Poetry Room. “It was quite easy to sit down,” said Heaney of the Lamont Library hideaway, “and doze off, even.”

Then there was Harvard Yard itself, he said. It was both the inspiration for the villanelle, and — as a former cow yard — a place that evoked his own country boyhood in Northern Ireland. “I don’t know where the gates come from,” he said of inspirations for his anniversary villanelle. “But I definitely know this: that the word ‘yard’ is very characteristic of Harvard as Harvard, but from my point of view goes very far back into infancy, to the farmyard, you know. The word has a complete world and a complete charge and almost a complete anthropology.”

Along the way, Heaney read that founder John Harvard was the son of a butcher (though one with ties to Shakespeare’s Stratford-upon-Avon). “The Yard really was a yard in those days,” said the poet of Harvard’s 17th century. “So I felt at home with John Harvard, in a special way.”

And commencements? Belonging to a university for a span of time gives you “a little history of your own, at a place, at a time, with friends,” said Heaney. “It gives you some kind of latitude and longitude for memory.”