A maestro and a wordsmith 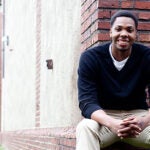 The right place, the Wright time

It’s often been said that the Harvard undergraduate experience is what one makes of it. Senior Matt Aucoin took that message to heart. He leaves campus having immersed himself in Harvard’s rich worlds of poetry and music, with a degree in English, a passion for writing and composing, and a future destined for The New Yorker, or the conductor’s podium, or both.

A resident of Kirkland House, Aucoin was poetry editor of the literary journal The Harvard Advocate. His thesis, a collection of poetry titled “Aftermusic,” recently won a Thomas T. Hoopes Prize for outstanding scholarly work or research. In 2009, he received several coaching sessions with classical music legend James Levine, and he used a 2010 Artist Development Fellowship from Harvard’s Office for the Arts to study at the famed opera house La Scala in Milan. He also is the recipient of the 2012 Louis Sudler Prize in the Arts, which recognizes outstanding artistic talent.

Aucoin’s mother is musical, his father is a writer, and there were always hundreds of books, and plenty of scores lying around the house. But his parents, he said, “never forced me into anything.”

He was smitten with music the moment he banged on the keys of his grandparents battered, out-of-tune, upright piano at age 6. Soon, a composer was born.

With composition, said Aucoin, “The thoughts aren’t always clear. It’s a kind of need. And for me, that need was awoken by Beethoven.” He recalled wandering his backyard after hearing Beethoven’s Ninth Symphony and wondering, “How could something this good have been created?”

He composed his first piece, “a twangy sort of Americana thing,” shortly after, and soon fell in love with opera’s fusion of words and song, completing his first libretto and score at age 9. Years of intense study of the piano followed, but by the time he was a teenager he suffered “a crisis of faith” in classical music. He retreated, playing the keyboard with his indie-rock band Elephantom and studying jazz. The break reinvigorated his love of the classical canon and inspired him to look beyond the conservatory to a place where he could chart his own musical path.

“It seemed I could make my own musical life [at Harvard] in a way I couldn’t anywhere else. I really loved that independent spirit,” he told the Gazette in February.

While at Harvard, Aucoin blazed his own artistic trail. He wrote and directed two operas, including “Hart Crane,” based on the troubled American poet, which premiered at the Loeb Drama Center in April. He also coached and accompanied countless Harvard singers, and served as music director for the Dunster House Opera Society and as assistant conductor for the Harvard-Radcliffe Orchestra (HRO).

“I think he is an unstoppable force of nature … beyond talented and gifted,” said HRO Director Federico Cortese. “He is a hypersensitive poet with amazing abilities and a voracious taste for music.”

A classmate and fellow musician called Aucoin “the kind of person that really makes you glad you went to Harvard.”

Aucoin said his introduction to poetry came later because “as a really young kid you are open to music in a way you are not open to nuances of language quite yet. To understand poetry, words need to have accumulated multiple shades of meaning for you.” He credits the creative energy of his peers at The Harvard Advocate and of his mentor, Boylston Professor of Rhetoric and Oratory Jorie Graham, for helping him to develop a “personal language in which you find your own rules.”

Aucoin arrived for a recent morning interview with a mop of curly wet hair, en route to observe a rehearsal at the Boston Symphony Orchestra for the remainder of the day. This fall he will work at the Metropolitan Opera, study composition at the Juilliard School, and direct the new orchestra/opera company at the Peabody Essex Museum.

It’s hard to imagine Aucoin, whose face doesn’t hold even the promise of a wrinkle, leading professional musicians, many of whom have been performing longer than he has been alive. But he sees the job as inspiring confidence in players and performers regardless of their age.

“I think of it as being a lightning rod, not the hand of Zeus,” he said. “You have to be able to give an intensity back to the orchestra.”

If his Harvard career is any indication, Aucoin will have intensity to spare.