Family values, in an orphanage 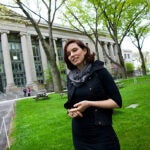 Daring to be a doer

At the Divinity School, Soni built on a service ethos that spans generations

Sonya Soni, her Hindi relatives have long maintained, just might be her great-grandmother reincarnated.

It’s not just that Soni shares the family matriarch’s quiet determination. There’s also the uncanny connection she has always felt to a particular spot in the foothills of the Himalayas: the orphanage for Indian girls founded 74 years ago by her great-grandmother, a cast-out widow turned close follower of Mohandas Gandhi.

“It’s the most sacred place in the world,” Soni said.

Soni long ago decided to become a doctor and to make the orphanage — which houses more than 50 girls and widows, educates 300 local children, and provides health care to the community — her life’s work. What she didn’t count on was how much her ideas of service, social justice, and the orphanage’s mission would evolve over the past two years at Harvard Divinity School (HDS).

“The hardest thing I’ve ever had to go through was understanding that the orphanage was doing more harm than good,” said Soni, 27, a graduating student in the master of theological studies program. “It’s treated like a charity, not like a place where the girls can be leaders and make it their home. I’m trying to change that.”

Growing up, Soni straddled two worlds. For most of the year, her family lived in affluent Orange County, Calif., where her parents immigrated before she was born. Every summer and winter, they returned to Dehradun, a city near the intersection of the Tibetan, Nepali, and Indian borders, to help local villagers manage the orphanage. Soni continued her semiannual pilgrimages through her years at the University of Southern California, where she earned bachelor’s and master’s degrees in public health.

“My parents thought it was important for us to understand our roots, not just our ethnic background, but our religious background and our values,” she said.

Spirituality has always been central to Soni’s life. Her early Catholic education immersed her in liberation theology, while her mother’s Buddhism and her father’s Hinduism taught her the importance of “being in love with what you do and putting in full passion, but also being detached from the outcomes.”

But she came to Harvard in 2010 skeptical of faith-based organizations’ role in the public health world. In fact, she planned to study whether ideology rather than evidence guided such groups’ decisions in providing health care to the poor. At HDS, her views broadened.

“Now, I wonder how I could separate spirituality from social justice,” she said. “In academia, we tend to abandon the moral underpinnings of our work, because it can’t be supported rigorously. But it guides so much of what we do.”

While at HDS, Soni served as a teaching fellow for an undergraduate course co-taught by Partners In Health founder Paul Farmer, and performed research under Nobel Prize–winning economist Amartya Sen at the François-Xavier Bagnoud Center for Health and Human Rights.

Their example taught her “that you can live what you preach,” she said. “Dr. Farmer never sees his work as service. He sees it as solidarity.”

She has already taken that attitude back to India. She is fighting to get young women more involved in the leadership and management of the orphanage, and is encouraging the board to work more closely with the Indian government to find long-term sources of aid. She hopes to shift the focus of the girls’ education and put them on the path to college and careers, not just to marriage and motherhood, when they leave at 18.

For now, Soni is deferring her acceptance to medical school to spend a year working as a health policy adviser to Newark, N.J., Mayor Cory Booker. After medical school, she hopes to return to India to work as a physician anthropologist. Her long-term goal, she said, is to bring attention to child health, human rights, and the politics of orphanhood in her family’s native land.

Her plans read like an ambitious road map for a long journey, but Soni insists that divinity school was more than just a detour along the way.

“More than anything, Harvard has taught me that education is not about the knowledge that you build. It’s about building character,” she said. “Intellectually and personally, I really found my voice here.”