A forest washing into the sea 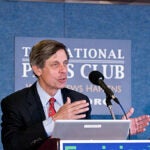 Harvard Forest Director David Foster walked carefully along the bluff, his GPS unit recording his steps as he threaded among tightly packed white oaks and pitch pines that grew right to the edge, but which almost certainly wouldn’t be there for long.

In the surf 20 feet below was a tangle of downed trees that days or weeks earlier had also stood on the bluff. A 2007 storm breached a nearby barrier beach and changed the ocean currents along this corner of Chappaquiddick Island. The new currents first ate away the broad beach between the forest and the sea and were now tearing at the sandy, unprotected bluffs with every high tide.

“This is probably the first forest we’re going to study because there’s not much of it left,” said Foster, who will be leading a research team of fellows and students there this summer.

Even to a regular visitor like Foster, the changes at the island’s Wasque reservation have been breathtakingly fast. Before his bluff hike, he had driven into the reserve’s sandy parking lot and had to look around to get his bearings. He pointed across the sandy, windblown beach to the surf churning with whitecaps.

“Last summer, you could park in the water,” Foster said. “This is an incredibly dynamic landscape. It’s a native pitch pine forest. They’re very salt tolerant.” He paused and looked along the shore at the bluffs and tangled trees lying at their base. “But they’re not that salt tolerant.”

Dynamic landscapes attract Foster, who, as a paleoecologist, has dedicated his career to understanding how landscapes change over long stretches of time. Foster is among a small group of resident researchers at the 3,500-acre Harvard Forest in Petersham, Mass., and part of a larger community of researchers, instructors, and students who come to the forest to teach, conduct research, and learn about topics ranging from the role of forests in abating climate change to the effects of moose expanding their range into Massachusetts’ forests.

Though based in Petersham, Harvard Forest scientists also conduct research on woodlands across New England, including in recent years Vermont, New Hampshire, and Connecticut.

“We try to spread them [research projects] across New England to cover climate, vegetation, history, and how people treat and conserve the land,” Foster said.

Foster has made a habit of walking the Wasque bluffs whenever he visits to record the rapid changes. This summer, his research team will study the forest, owned by the Trustees of Reservations, and other changes on the island. They’ll take core samples of trees and sediment samples from ponds, record vegetation and soil makeup, and visit the Polly Hill Arboretum, where another Harvard Forest project is wrapping up.

Polly Hill was the epicenter of a massive oak die-off in 2007 that brought Harvard Forest researchers to the island because of the similarity to an event 5,000 years earlier that Foster and colleagues had connected to a period of climate change. In that ancient die-off, revealed through pollen grains found in the sediment of lakes and ponds, oaks on the Vineyard and on Cape Cod had suddenly died and were replaced by a beech forest that endured 1,000 years before oak slowly took over again.

Foster believes that a similar climate-change dynamic may have been at play in the recent die-off. The trees were infested with fall cankerworms for three straight years. The caterpillars were so numerous that Polly Hill Arboretum Director Tim Boland said he could hear the rain of their droppings, called frass, as he walked through the forest.

In each of the first two years, the trees were defoliated but able to re-leaf after the outbreak subsided. In the third year, the stressed trees were trying to re-leaf again when a drought hit.

“That was just the death knell,” Boland said. “They just collapsed and died. They couldn’t pull it together.”

While it’s difficult to tie an individual natural event to climate change, the patterns seen at Polly Hill and Wasque bear the signature of what Foster would expect from a warming climate. Rising temperatures alone won’t kill trees, he said. But warmer winters will allow more pests to survive and new ones to invade. More extreme weather means more droughts that can kill trees weakened by pests. And rising seas coupled with more extreme storms means more erosion like that at Wasque.

At Polly Hill, Boland said he resisted pressure from neighbors to spray the caterpillars because the arboretum is managed as a natural area. Spraying would have devastated insects of all kinds, even beneficial ones. Once the trees were dead, people wanted the forest logged. That’s when he called Foster and other Harvard Forest researchers to take a look.

Harvard Forest’s resources “enable us to actively bring in people to do this research and ultimately inform the larger island population what’s going on,” Boland said. “It helps the Vineyard community get answers to something mysterious to them, threatening to them.”

Dying trees are a natural part of a forest, Foster said, even in extreme cases like the Vineyard’s oak die-off. Logging, on the other hand, disturbs the forest floor and microorganisms. It extracts from the forest system the nutrients present in the trees, which would otherwise be released into the soil.

Among other studies, Harvard researchers working at Polly Hill traced the nitrogen released by decaying leaves and bark from the oak trees. Research on the tract, being written up for publication, shows that soil nitrogen levels rose and have slowly returned to pre-die-off levels.

The elevated nitrogen is nature’s way of providing for the forest’s regrowth, Foster said. It acts as a fertilizer in concert with the suddenly ample sunshine to spur new growth.

A walk through the forest today shows a lot of life, though mainly in the form of undergrowth between the silver-gray trunks of dead oaks. Bushes, shrubs, and a rising group of young beech trees are growing fast in the sunlight once blocked by the oak canopy.

“It’s exquisite, if you’ve got the perspective to understand how the forest works,” Foster said. “The trees are dead, but they’ll come back. The forest is still functioning.”