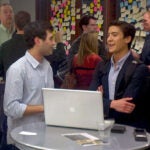 ‘X-Rays of the Soul’ examines history, influence of Rorschach test

With the creation, in 1921, of the Rorschach inkblot test, psychologists and researchers had at their disposal a tool that might offer access to the inner life or “secret self” of a subject: the projective test.

A new exhibition at Harvard’s Collection of Historical Scientific Instruments, “X-Rays of the Soul: Rorschach and the Projective Test,” tells the story of the triumphal rise, and periodic setbacks, of the projective test movement, and portrays the heady confidence that science could be used to extract and access the most human parts of human beings.

As opposed to objective tests, which compare a subject’s responses with an accepted set of correct answers, the Rorschach test, and the Thematic Apperception Test (TAT), developed at Harvard in 1935, present subjects with ambiguous images or situations, and analyze their responses for clues to hidden emotions and mental states.

Visitors to the exhibition are immediately confronted with a projection of a Rorschach inkblot and analysis of subjects’ responses to the image. Other displays include examples of responses from people who are depressed, suicidal, or victims of trauma.

At the back of the exhibition space, a “projective theater” will play excerpts of the 1946 film “The Dark Mirror,” about twin sisters who take the Rorschach test in an effort to determine which committed a murder. Clips of researchers discussing the TAT test will also be shown.

“Telling stories based on inkblots started as a parlor game in the 19th century,” said Jean-Francois Gauvin, lecturer on the history of science and director of administration at the Collection of Historical Scientific Instruments. “It was Rorschach who saw their potential and made them into an instrument that might capture, as the exhibition title says, an X-ray of the soul.”

The exhibition will be on display in the Special Exhibitions Gallery, Room 251 of the Science Center, through June 30.