Where art blends with activism 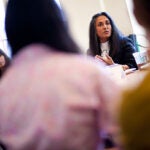 Tunisian artist eL Seed took his spray paints out into the cold last week to create an example of “calligraffiti” in the Science Center’s plaza. The canvas featured the eponymous Arabic phrase in stylized black and gray whorls over a field of purples.

The French-born artist completed the work, which he called “Taking Back the Purple,” in five hours.

“For those of us who are nonartists, it is a really amazing thing to go from a blank canvas to a descriptive and deep collage of thought and color,” said Paul Beran, director of the Outreach Center at the Center for Middle Eastern Studies (CMES).

EL Seed describes his work as occupying a middle ground between classical Arabic calligraphy and action painting. He first used calligraphy to help connect with his own Arab identity. Failing to find a teacher, eL Seed studied on his own. His lack of formal education in calligraphy, coupled with the intuitive, reflexive movements encouraged by spray painting, led him toward a freer approach to shape and color.

But he is not satisfied with merely creating beautiful works.

The conditions in the streets that help him speak so loudly sometimes dictate changes in his artistic plan. Last week, one can of gray began to change color in midspray, prompting a consult with another graffiti artist in the audience. When the wind whipped the canvas too violently to continue, eL Seed would break to speak to his audience in English, French, and Arabic. The artist took those opportunities to thaw his cold, bare, paint-covered fingers, but also to discuss the current political situation in Tunisia.

“They say that artists create revolutions, but in Tunisia it was the contrary: The revolution created the artists.”

EL Seed drew inspiration for his work from a visit to Tunisia in December. He was there to paint a mural in Kairouan commemorating the one-year anniversary of the Tunisian uprising. The locals supported his project but begged him not to use purple, which had been the color of former ruler Ben Ali’s regime. Sensitive to the political weight of the color, eL Seed obliged, but later reconsidered his stance.

“Just as the people take back their freedom of speech, as an artist, I need to take back this color.”

He sees his art as a vector for change, hoping that viewers develop a feeling of taking back what is theirs. He told many stories of popular participation in December’s project, describing citizens who had “never picked up a can” of paint joining him for up to eight days of work. Now, some of those street-art novices are painting their own murals. That artistic initiative, said eL Seed, instills a sense of pride that bodes well for the future of Tunisia.

“That is the proof of a participatory democracy,” said eL Seed, “when you involve the people in a project.”

While eL Seed was the only one to wield the spray can last week, he had what amounted to an artistic consultant in the crowd. Tamer Sameer, a Saudi Arabian street artist who studies at the University of Massachusetts, Boston, stepped forward to advise eL Seed how to resolve a few wind-influenced lines. Sameer took the work’s political message to heart.