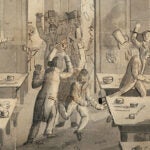 A few years ago, a student browsing the stacks in Harvard’s Harry Elkins Widener Memorial Library opened an old book. Pasted in the front was a letter from author and philosopher Henry David Thoreau, an 1837 graduate of the College who is today an icon of civil disobedience.

This civil and obedient student alerted library authorities, who withdrew the letter from circulation, copied and cataloged it, and secured it for posterity in a safer place.

That letter is among 11,000 fragile or rare items rescued since 2008 from the stacks at Widener by students, scholars, and library staff who have a keen sense of what needs to be protected and conserved. Such items end up on what library insiders call “The Shelf,” a book-lined basement corridor in Widener overseen by Preservation and Digital Imaging Services. Think of it as triage, experts there say. Rescued items are assessed, repaired, digitized, and — most often — removed from general circulation. (Support for this work comes from the Daniel L. and Alisa R. Doctoroff Library Fund and from the Betty and Barrington Moore Jr. Fund for the Harvard College Library.)

The origins of this rescue effort go back to the days of microfilm, when a “brittled books” program flagged fragile volumes. They were copied to film, and the originals were placed in collections where physical access is limited. Since 2008, a new digitization-conservation collaboration at Widener reviews vulnerable materials from the stacks, digitizes them, and updates catalog entries. (Harvard is believed to employ the only full-time preservation review librarian in the country.) In the end, access is improved for scholars worldwide.

“Objects are being moved to wherever is best for them,” said Franziska Frey, the Malloy-Rabinowitz Preservation Librarian and head of Preservation and Digital Imaging Services. “But they can still be on your desktop,” added Maggie Hale, librarian for collections digitization.

The Thoreau letter points to a surprising fact. Many items in general circulation at Widener would anywhere else only be found in special collections. Vulnerable items still in the stacks come to light because of alert library users. “They’re targeting the items we most want to find,” said Todd Bachmann, associate head of imaging services at Widener.

His boss, Bill Comstock, calls it “deputizing” the students, scholars, and staff who comb through holdings. (If you find an item in the stacks that seems rare or vulnerable, take it to the circulation desk. Attendants there get regular conservation training.)

Rare items linger in the stacks, in part, from the sheer size and complexity of Harvard’s collections. The University has more than 90 libraries across the globe. They hold 17 million items in a system that is the oldest in the United States and the largest in the academic world. Widener, its flagship operation, contains 4.5 million books and other cataloged items on 65 miles of shelves. Widener is six stories high and has four stories of stacks underground.

Add to size the complexities that age brings to a library system. Harvard’s first books date to 1638. By the time of the American Revolution Harvard still had only 1,000 volumes, but by the eve of the Civil War it had 65,000. Some of the latter, it seems, are still in general circulation, along with many of the 164,000 items the library had cataloged by 1877.

Then there is the fact that Harvard’s collection includes more than books. John Langdon Sibley, head librarian at Harvard from 1856 to 1877, called himself  “a sturdy beggar” of library items. During his tenure, donated volumes arrived by the box and barrel. But the prescient Sibley also saw the value of pamphlets and other ephemera. As early as 1853, while still an assistant librarian, he had collected 30,000 or more — many of them rummaged from old trucks, bought at auction, or rescued from pulping operations. It is these pamphlets and other nontraditional items that often show up on “The Shelf.”

Items recently saved from the open stacks include a collection of cartoonlike drawings done by Harvard undergraduates in 1850. (“I’m not sure they’re still funny,” said Bachmann.) There is a complete set of a royalist French journal in print from 1790 to 1792 — one of just a few in the United States. Add to that a bound copy of what look like old baseball cards, a book salesman’s dummy copy of “Half Hour Sundays with Jesus.” There is a book of horrific battlefield images from World War I, a rare vanity press album showing Henry Ford on vacation with other captains of industry, and an 1893 pamphlet from the other side of the tracks: In a few cheap pages, Isaac Jenkins tells his story of being lynched and left to die.

Not many things recovered from the stacks at Widener have the stature of a letter from Thoreau — “marquee items,” Comstock called them. But all of them echo Sibley’s 1846 diary entry on ephemera: What is “not very valuable now,” he wrote, “will become valuable here after.”