The future of self-knowledge 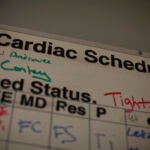 A health care revolution is on the way, driven by the availability of cheap genetic sequencing, the head of the personal genomics company 23andMe said Tuesday, adding that she’s not sure we’re prepared for it.

Anne Wojcicki, chief executive officer and co-founder of 23andMe, appeared before a packed house at Emerson Hall in an event sponsored by the Program on Science, Technology and Society. Wojcicki talked about her company’s personal genomics business, which offers screening of a million possible genetic variations linked to a wide variety of personal traits, disease conditions, and ancestral locations.

The company has also developed a more in-depth “exome sequencing,” which instead of screening for known genetic variants provides raw genetic data for the 50 million base pairs that hold the codes for the proteins that do much of the body’s work. The price of such in-depth testing is now so cheap, Wojcicki said, that it rivals the cost of routine medical tests.

The first human genome was decoded some 10 years ago at a cost of $3 billion. Since then, the price has fallen dramatically, reaching $1 million in 2008 for a full exome sequence, and falling again, to $999, last year.

“It’s so cheap, and you’re sequencing everything. You walk in the doctor’s office and it’s cheaper than running a strep test,” Wojcicki said. “It’s going to revolutionize health care and I think we’re pretty underprepared for it.”

Responding to Wojcicki, panelists aired concerns over potential uses of genetic information — asking about privacy issues, raising the possibility that insurance companies, for example, might use it to discriminate when writing long-term care policies.

They also asked about commercial exploitation of the data, about who would control genetic information, and even about potential issues of equity, since the poor may not have access to privately paid screening services. Fung turned the company’s business model on its head, pointing out that the value of 23andMe’s research comes from customers’ genetic data.

“Maybe you should pay them,” Fung said.

23andMe’s routine screening test contains markers for a wide variety of diseases, from breast cancer to Alzheimer’s disease to type 2 diabetes. It also contains genes known to be associated with sensitivity to certain drugs and looks for disease carrier genes.

The company also offers information about ancestry, showing where a person’s genes come from — including how much Neanderthal DNA they have. It also offers a service called Relative

Finder, which looks for close matches in the 23andMe database.

The company’s customers are mainly motivated by a desire to know more about themselves, Wojcicki said. By learning about their genes, they get a glimpse into their possible future, and by learning about ancestry they learn about where they came from.

Behind 23andMe’s products lies a research enterprise that draws from scientific data to update customers about findings connected to their genomes, and also seeks to use customers’ genetic data and their background information to conduct crowdsourced association studies for disease.

One example offered by Wojcicki involved a friend who has a family history of pancreatic cancer and whose genetic analysis found a significant change in a particular protein. The normal way to find out if that genetic change was linked to pancreatic cancer would be to apply for a government grant and conduct research, a process that can take years. Instead, Wojcicki went to her company’s scientists and asked them to look for an association between that gene and pancreatic cancer among the company’s database of more than 100,000 customers. The answer came back in 48 hours: 47 people in the database had the genetic variant. Seventeen people had filled out background surveys. Sixteen of those reported no cancer of any kind; one reported colon cancer.

So within two days instead of two years, Wojcicki said, the company had the answer that this gene was probably not the one causing pancreatic cancer in her friend’s family. The case prompted 23andMe to create a cancer family history survey, to aid future searches for associations between genes and cancer. Within 36 hours of posting the survey, there were 12,000 responses.

Wojcicki called this an example of “real-time research,” and said that this is the way research must be conducted in the future.

Zittrain offered his own personal example, saying that in 2010 he developed a strange illness that doctors couldn’t figure out. His genetic screening results showed he had genes for hypercoagulation, which could lead to blood clots. He shared that information with his physicians, who ran a $500 test that took three days and confirmed the information. He wound up losing part of his liver, but is otherwise OK, he said.

“I know, too much information, but get used to it,” Zittrain said.