Take a seat, and listen 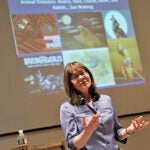 The chairs, aside from being relaxing places to sit in the Yard or on its outskirts, mean the return of open-air song, dance, and performance numbers. The entertainment series known as “The Chairs Revue,” which offers musical and theatrical performances by students and faculty, along with occasional appearances from members of the American Repertory Theater (A.R.T.), was back in action on today.

The spring season, which will run weekdays at noon through April 26 on the plaza outside the Science Center, kicked off with a mini-rock concert. The performance featured musical selections from the Brooklyn-based indie rock band The Lisps, which is staging the world premiere of their Civil War- and science fiction-themed show, “Futurity: A Musical by the Lisps,” through Sunday at the A.R.T.’s sister theater space, Oberon.

“This is actually not the coldest gig we’ve ever played,” laughed César Alvarez, frontman of The Lisps and creator of the A.R.T. show, as he and band co-founder Sammy Tunis led a selection of songs from the band’s repertoire and the new production despite blustery winds and cool temperatures. The crowd responded with hearty hoots and warm applause.

Nanny Nora Bradford ate her lunch while listening to the concert. “It was such a surprise. I passed by it on my way through with the kids and decided to check it out during my break. I will definitely come back for other shows.”

“This kind of collaboration between Harvard and the A.R.T. is so important because it brings theater directly to the students,” said Allegra Libonati, artistic associate at the A.R.T. and curator of Common Spaces, an initiative created in 2009 to strengthen the sense of community on the Cambridge campus and to create informal gathering spaces for Harvard students, faculty, and staff.

“The more we do together, the better,” said Libonati, “like sharing educational and professional theater experiences like last year’s ‘The Gershwins’ Porgy and Bess,’ and today this great group, The Lisps.”

Cambridge resident Lindsay Greimann saw the event promoted in the online Gazette and decided to investigate. “It was great. I think it’s a fabulous opportunity, whether you seek it out or whether you stumble upon it.”

“The success of past ‘Common Spaces Chairs Revues’ has encouraged us to offer daily performances drawn from the talented Harvard community this spring,” said Lori Gross, Harvard’s associate provost for arts and culture. “Engaging students, faculty, and staff through art has energized the campus, and created opportunities for conversation and new audiences for the arts.”

This week’s noon performances will include Zeta, a dubstep (electronic dance music) act created by Greg Yang ’14, on April 10; a singer-songwriter and teaching assistant in physics, Lester Kim ’11, on April 12; and Mariachi Véritas de Harvard on April 13. In addition to the noontime shows, additional performances will be scheduled during the program’s three-week run.