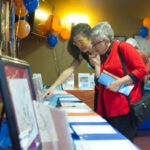 Poet to reprise 'Villanelle for an Anniversary' at Commencement

Seamus Heaney, a Nobel Prize laureate in literature with a long connection to Harvard, will read his 1986 “Villanelle for an Anniversary” at this year’s Commencement ceremonies.

The reading — during Morning Exercises May 24 — will cap a yearlong celebration of the 375th anniversary of Harvard College.

Heaney wrote and delivered the poem in commemoration of the 350th anniversary.

There is an extra touch this year: The reading will be followed by the world premiere of “Villanelle for an Anniversary,” an a cappella work written by Preceptor in Music Richard Beaudoin, an American composer in his fourth year on the faculty of the Department of Music.

Set to Heaney’s text, the four and a half-minute piece was commissioned by Harvard President Drew Faust, the first commissioning of a new work during her tenure and the first such commissioning by a Harvard president in decades.

“I’ve been here long enough that the poem means something to me personally,” said Beaudoin, who started writing the music immediately after reading the Heaney poem. “It’s probably one of the most joyful pieces I have written.”

The villanelle form, brought to English verse from French poetry in the 19th century, employs the first and third lines of the first stanza as alternate rhyming refrains in the third line of each successive stanza — and as the last two lines in a couplet at the end.

The repeating lines are important to the musical work, said Beaudoin, who composed it for a mixed chorus: soprano, alto, bass, and tenor. He called the Heaney poem “visual and honest” and very beautiful — in part because it is not “over-celebratory.”

Heaney, an Irish poet, translator, and playwright born in 1939, started at Harvard as a part-time visiting professor in 1979. From 1985 to 1997 he was the University’s Boylston Professor of Rhetoric and Oratory. From 1998 to 2006, he was the Ralph Waldo Emerson Poet in Residence at Harvard.

Heaney’s last formal visit was in October 2008 when he read to a packed house at Sanders Theatre. The event’s free tickets had “sold out,” in a matter of hours, weeks before. (The poet’s unstoppable fans are called “Heaneyboppers.”)

At the Sanders event, Heaney sketched in some of the background for “Villanelle for an Anniversary,” first delivered in Tercentenary Theatre in 1986. The poem, he explained, was an attempt to answer the question: “How do people listen to a poem over a loudspeaker?”

The answer turned out to be the villanelle and its repeated rhyming refrains. The strictly formatted 19-line poem was the first villanelle he had written, said Heaney, “and should be the last.”

Helen Vendler, Harvard’s Arthur Kingsley Porter University Professor, admired the poem for its evocation of Harvard Yard, she said in 2008, and for what it said about the receptive and absorbing beauty of a university. The poem’s third line reads, “The books stood open and the gates unbarred.”

This year’s musical composition inspired by the Heaney villanelle will be the performed by the Commencement Choir, conducted by Andrew Clark.

The choir will also perform “For the Graduation” by Carson Cooman ’04, which premiered last year. The new works are part of an initiative to create new music for Harvard graduation events.

The Morning Exercises will also include traditional works performed for generations at Harvard Commencement ceremonies. One is William Tans’ur’s “Give ear, ye children, to my law,” a metrical version of Psalm 78. Another is “The Harvard Hymn,” by John Knowles Paine. The entire assembly sings it in Latin after honorary degrees are awarded.

Other music highlights at Commencement this year:

The Baccalaureate Service Music — for students only — at 2 p.m. May 22 in the Memorial Church. (Audio for families and guests will be available at Tercentenary Theatre.) Featured music includes “Felices Ter,” an anthem by Randall Thompson ’20 (1899-1984). It was written in 1953 as a 70th birthday present for Harvard Glee Club choirmaster Archibald T. Davison. This brief a cappella work sets to music the ode by Horace that appears on the Class of 1857 Gate, across from the Holyoke Center.

Cooman’s “For the Graduation” will also be sung at the Baccalaureate Service, where it premiered last year. It was commissioned by the Holden Choirs and sets to music a text by American poet Robert Creeley (1926-2005), who attended Harvard College in the 1940s.