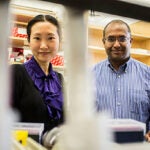 The likely culprit in sharp worldwide declines in honeybee colonies since 2006 is imidacloprid, one of the most widely used pesticides, according to a new study from the Harvard School of Public Health (HSPH).

The authors, led by Alex Lu, associate professor of environmental exposure biology in the Department of Environmental Health, write that the new research provides “convincing evidence” of the link between imidacloprid and the phenomenon known as Colony Collapse Disorder (CCD), in which adult bees abandon their hives.

The study will appear in the June issue of the Bulletin of Insectology.

“The significance of bees to agriculture cannot be underestimated,” says Lu. “And it apparently doesn’t take much of the pesticide to affect the bees. Our experiment included pesticide amounts below what is normally present in the environment.”

Pinpointing the cause of the problem is crucial because bees — beyond producing honey — are prime pollinators of roughly one-third of the crop species in the United States, including fruits, vegetables, nuts, and livestock feed such as alfalfa and clover. Massive loss of honeybees could result in billions of dollars in agricultural losses, experts estimate.

Lu and his co-authors hypothesized that the uptick in CCD resulted from the presence of imidacloprid, a neonicotinoid introduced in the early 1990s. Bees can be exposed in two ways: through nectar from plants or through high-fructose corn syrup beekeepers use to feed their bees. (Since most U.S.-grown corn has been treated with imidacloprid, it’s also found in corn syrup.)

In the summer of 2010, the researchers conducted an in situ study in Worcester County aimed at replicating how imidacloprid may have caused the CCD outbreak. Over a 23-week period, they monitored bees in four different bee yards; each yard had four hives treated with different levels of imidacloprid and one control hive. After 12 weeks of imidacloprid dosing, all the bees were alive. But after 23 weeks, 15 of the 16 imidacloprid-treated hives had perished. Those exposed to the highest levels of the pesticide died first.

The characteristics of the dead hives were consistent with CCD, said Lu; the hives were empty except for food stores, some pollen, and young bees, with few dead bees nearby. When other conditions cause hive collapse — such as disease or pests — many dead bees are typically found inside and outside the affected hives.

Strikingly, said Lu, it took only low levels of imidacloprid to cause hive collapse — less than what is typically used in crops or in areas where bees forage.

Scientists, policymakers, farmers, and beekeepers, alarmed at the sudden losses of between 30 percent and 90 percent of honeybee colonies since 2006, have posed numerous theories as to the cause of the collapse, including pests, disease, pesticides, migratory beekeeping, or some combination of these factors.