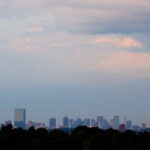 Economist offers insights on how to purify global supplies

The permanent way to prevent diarrhea from killing an average of 4,000 children a day worldwide would be for governments to step in and provide safe, clean water for their people to drink. But that prospect appears to be years away.

In the meantime, Harvard economist Michael Kremer is among those working on alternative solutions, conducting research and allying with nongovernmental organizations to develop systems that are effective and that people will use.

Kremer, Gates Professor of Developing Societies, described his efforts and provided an overview of recent research on the topic of safe water during a talk Tuesday at the Radcliffe Institute for Advanced Study. Part of the institute’s water series, Kremer’s talk took the audience from urban Morocco, where a key study examining links between water access and health took place, to rural Kenya, where Kremer’s own research has centered on chlorination of rural water sources.

There are several challenges regarding the world’s water, Kremer told the audience crammed into a seminar room in the Radcliffe Gym. Among the concerns are possible shortages in the global supply, though that issue is more central to agriculture, which uses 70 percent of the global supply, and industry, which uses 20 percent. Domestic use accounts for just 10 percent. Conversations about safe water involve just a fraction of domestic use, Kremer said, since you’re mainly talking about water for drinking and cooking, not for bathing and other household uses, like flushing toilets or watering lawns.

The major issues concerning domestic water supply involve safety and access. There is considerable willingness to pay for improved access to water, even untreated water, as illustrated by a 2009 study in urban Morocco that compared homes with piped water to families getting water from a communal source.

The researchers thought there might be a health benefit from having water — even if untreated — piped into homes, perhaps through a willingness to wash hands more, but the study showed no link between improved access and health.

While people appear willing to pay for improved access, studies of chlorination use to purify water have shown there is little interest in paying for purification. One study showed that less than a tenth of families would pay full price for a bottle of water purification solution, and just a few more would pay if the price were reduced. When the solution was offered for free, however, usage jumped to about 60 percent.

Kremer has worked with local nongovernmental organizations to design and distribute free chlorination systems at springs across Kenya, which now serve 400,000 people. A similar pilot program in Haiti serves 30,000.

Even when chlorine solution is very inexpensive, the question remains on how you set up such a system and maintain it. Though some analysts argue that charging a nominal fee for maintenance and replenishment is a reasonable request, Kremer said that even low fees appear to discourage many people from using the system.

Kremer is investigating alternative financing sources, such as using carbon offsets created by preventing the burning needed to boil water.

“We’d like this to be free. We’d like it to be automatic, or as convenient as possible,” Kremer said.

The low cost of chlorination, Kremer said, brings such improvements within the financial reach of even the poorest governments. The more difficult challenge comes in designing viable systems and getting people to use them, which will require expertise in management, economics, engineering, and even sociology.

“If we come together, this is a goal we can … realize,” Kremer said.