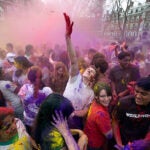 The writer Anne Fadiman made a confession Sunday evening to a roomful of shocked Cambridge Public Library patrons. It was a tale of familial abuse — of the bookshelf, that is.

In her childhood home, books were subjected to an “assault on innocent pages we viewed as a form of love,” said Fadiman, an essayist and the author of “The Spirit Catches You and You Fall Down.” The Fadimans don’t just read books, she said: “We live with them, we live through them, we live among them, and we sometimes live under them.”

Fadiman, the Francis Writer-in-Residence at Yale University and a member of Harvard’s Board of Overseers, explored the varieties of book lover in “Using Bacon for Bookmarks: How Readers Treat Their Books.” The talk was a fitting installment in the John Harvard Book Celebration, a semester-long series of events at Cambridge and Boston public libraries in honor of Harvard’s 375th anniversary and John Harvard’s original gift of 400 books to the University.

“Love of books is like any other kind of love,” Fadiman said. “It takes different forms.” There are “courtly lovers” of books, who treat books as sacred objects, and “carnal lovers” — those who engage with their books as physical objects, and who are more than willing to profane them in all manner of ways.

Examples of the latter camp abound. Wordsworth once cut open the pages of a new book (a necessity due to the bookbinding techniques of his time) with a butter-greased knife, according to Fadiman. William Empson was reprimanded by a librarian for returning a copy of “Dr. Faustus” smeared with jam from his morning toast. A Columbia University librarian reported a returned book with a fried egg in its pages. And as per the tale that provided the lecture’s title, New Yorker legend A.J. Liebling was said to have used a strip of bacon for a bookmark.

Harvard librarians, Fadiman reported, have found in the pages of books a sewing needle, feathers, playing cards, yarn, a parking ticket, an arrest warrant, “a piece of fuzzy pink cake that was presumed to be a former Hostess Sno Ball,” and even a used condom.

“At least those things are removable,” she conceded. “The one thing that is least removable is your own words.”

Indeed, annotation is a controversial topic among book lovers. While few readers would cop to scribbling in the margins of a library book, many bibliophiles disagree over whether one should annotate books at all. Paperbacks, hardbacks, first editions, family heirlooms, borrowed copies: Most readers have their own rules for what can be marked up, she said.

The president of the Levenger catalogue, a high-end reading and writing instrument retailer, once told Fadiman that to avoid the temptation to scrawl when reading nice books, he held a chopstick in his free hand instead of a pen. Fadiman frowned on the technique.

“It seems to me that by the very act of holding the pen rather than the chopstick, we’re saying, ‘All right, author, you’re making me have thoughts,’” Fadiman said. Even if we merely mark passages with check marks or exclamation points, “we’re interacting with that book in a way that we couldn’t if we were holding a chopstick.”

Ultimately, Fadiman professed equal respect for both types of book lovers. Alexander the Great slept with a copy of Homer’s “Iliad” annotated by Aristotle stashed under his pillow. While that courtly attitude toward books seems foreign to many of us now, she said, Alexander’s respect for the printed word is something book lovers of all varieties have in common.

“Whether your love is courtly or carnal,” Fadiman said, “I hope you will join me in honoring and preserving the physical book — which, even if we don’t sleep with it like Alexander the Great, is nonetheless something to have and to hold.”

What would Fadiman keep under her pillow? An anthology of world poetry that belonged to her father, the critic Clifton Fadiman. Though he made his name writing about Western literature, Fadiman said, her father began to discover the power of other cultures’ works in his 80s.

“Just as his life closed up physically in his old age, so his mind opened,” she said. “And it was books that did that.”

That idea of the scuffed-up, marked-up book as a vehicle for dialogue — especially among different generations — resonated with at least one member of the audience.

The next John Harvard Book Celebration event, “From the Hearth to Kindles and Nooks: Fairy Tales in an Age of Electronic Entertainments,” will feature Maria Tatar, John L. Loeb Professor of Germanic Languages and Literatures and of Folklore and Mythology. The lecture will be held April 5 at 6 p.m. in the Boston Public Library, Dudley Branch, 65 Warren St., Roxbury.