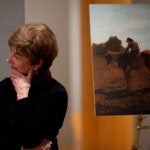 U.S. archivist says interactivity must rise because users demand it

The archivist of the United States, David Ferriero, says that one of the core challenges facing today’s librarians, archivists, and museum curators is the need for them to work across disciplines to deliver the integrated, seamless level of service that tech-savvy users are increasingly coming to expect.

“We are all in the same business: protecting, collecting, and allowing the use of information,” he told a packed audience during a “Harvard Library Strategic Conversation” on integrating libraries, archives, and museums (an initiative referred to as “LAM”) held Monday at Longfellow’s Askwith Hall.

Ferriero, previously director of the New York Public Library (he also held the top position at the Massachusetts Institute of Technology Library), spoke of the necessity of understanding exactly how users interact with information as the foundation of LAM integration.

“We need to focus on user behavior. We don’t know enough about how they use resources,” he said, but “users expect to be able to span the scope of knowledge in seconds.”

Ferriero, who grew up in Beverly, described his motivations for pushing LAM integration at the National Archives, where he oversees 44 museums and  archives, three of them in Massachusetts. He is working to maintain relevancy with researchers and visitors, and “has a mandate from President Barack Obama” to increase transparency, collaboration, and public participation.

Following Ferriero’s presentation, Professor Holly Witchey of Johns Hopkins University, interim director of the Marcus Institute for Digital Education in the Arts, offered her perspectives on LAM integration from the museum curator side of the triangle. She emphasized the obstacles to LAM integration, including the lack of interdisciplinary standards for organizing collections, the geographic distance typically separating LAM collections, and interdisciplinary rivalries about which agency should take precedence.

“Our job as curators is LAM integration, but we all do it so idiosyncratically,” she noted. Witchey described a split among museum curators dividing those who prefer the old, idiosyncratic systems of organization and those who recognize the value added by integration. Most of all, Witchey noted, “Our audiences simply expect integration,” and there’s no escaping it.

Ferriero and Witchey were joined in the conversation by Günter Waibel, director of the Smithsonian’s digitization program, and Tom Hickerson, vice provost of libraries and cultural resources at the University of Calgary in Canada. After each panelist had spoken, moderator Waibel initiated a discussion among the panelists and audience about the opportunities and obstacles presented by LAM integration.

Robert Darnton, Carl H. Pforzheimer University Professor and University Librarian, asked about the obstacles to translating “the power of the object” — that is, how artifacts that may have a more visceral appeal (rather than just an informational one) can be portrayed accurately in a digitized format.

Ferriero acknowledged the challenge, one that technology may never be fully able to answer. “Working in Washington,” Ferriero responded, “I watch people lining up to see the Declaration of Independence all the time. Yes, you can find it online, but you can’t replace the emotional experience of standing in front of it.”

What came across clearest during the discussion is that user expectations are driving the movement toward LAM integration, and that professionals in all three disciplines are accelerating their efforts to make it happen.