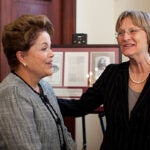 The Vienna-based Institute for Integrative Conflict Transformation and Peacebuilding was officially renamed the Herbert C. Kelman Institute for Interactive Conflict Transformation on Dec. 29, 2011. Herbert C. Kelman is the Richard Clarke Cabot Professor of Social Ethics Emeritus and for a decade directed the Program for International Conflict Analysis and Resolution at Harvard’s Weatherhead Center for International Affairs. Kelman was also elected as the institute’s honorary president.

The Kelman Institute is affiliated with the Center for Peace Research and Peace Education at the University of Klagenfurt, Austria. Its primary focus is on conflict transformation and peace building in international and intercommunal relations. Its work follows the tradition of interactive problem solving — an approach developed by Kelman and his associates, which is derived from the pioneering work of John Burton and is anchored in social-psychological principles, and which Kelman has applied most extensively to the Israeli-Palestinian conflict over the past four decades.