In the swim of things 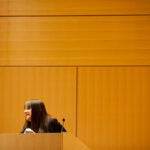 How good does the prospect of visiting Puerto Rico sound in the middle of January? Or Hawaii? That’s where the Harvard men’s and women’s swimming and diving teams traveled, respectively, this winter. It wasn’t exactly a vacation, but their annual training trip — funded with the money they raise working as instructors in the Harvard Swim School.

“The Swim School has been operating since the mid-’70s when former swimming and diving coaches decided it would be a good way to make money and help pay for training trips” by offering lessons to the community, said assistant diving coach Keith Miller, who has helped to oversee the program since arriving at Harvard in 1991.

“Our athletes work really hard during the school year. They have morning practices, afternoon practices here … six days a week, which they work around their school schedules. But then during January break, we get to go on a trip someplace where we can really focus on training, get a lot of team bonding, and get a lot of work done in preparation for the big meets at the end of the season.”

The school runs twice a year for six weeks, once in the spring, with lessons taught by freshmen and juniors, and once in the fall, taught by sophomores and seniors. “The vast majority of our students are 5 years old through 15 years old, but we also have adults. We probably have 15 or 20 adults each session,” said Miller. Offerings range from beginning nonswimmer instruction to advanced technique, and the school is open to the community.

“One of the things I love most about participating in Harvard Swim School is that it bridges a gap between the Harvard undergraduate population and the Cambridge community at large,” said swimmer and co-captain Kristi Korsberg ’12.

“Each year, when Harvard students have about five weeks off between fall and spring semesters, the swim and dive team remains on campus to practice,” she said. “Luckily for us, it also means that we have the opportunity to relocate ourselves to a warm climate for a week in the middle of winter. Our goal is simple: to do nothing but focus on quality training without any distractions. These training trips are crucial to our team’s success.”

“Puerto Rico was beautiful,” said swimmer and co-captain Matthew McLean ’12. “It’s great to be able to train outdoors, especially during the winter, as it’s a much-needed change to the dreary weather Cambridge provides during that time. We have a bunch of traditions that we carry out, and we always have a meet against another team in Puerto Rico. On an afternoon off, we went to the beach and relaxed. It was great.”

Swim students receive top-notch instruction, like that from Olympic qualifier Mike Mosca ’15, a diver. “Mosca is an Ivy League champ this year; he’s excellent,” said Miller. “And I like to have the divers demonstrate on the final day. The kids love that.”

But instructing the community has benefits for the swimmers and divers, too.

“In a way, it makes us think about our stroke and focus on technique, more so than we would while doing a set in practice. It’s great to have a few hours a week to look at technique and the fundamentals that we learned so long ago, and do it through teaching others,” said McLean.

“Verbalizing and explaining particular aspects of stroke technique or justifying why that technique is valuable has enhanced my understanding of swimming,” said Korsberg. “It’s really proved to me that there’s always something to be learned, no matter how much personal experience I think I have.”

“I love teaching something that we’re good at, and it feels awesome to have these kids look up to us,” added McLean.

For these outgoing seniors, their character has been strengthened through years of instructing, and lifelong memories have been made on the resulting jaunts to St. Croix and Barbados, where the teams have previously gone. There’s dinner with the team every night, followed by activities as a group, and, of course, snorkeling ventures.

“In the hotels, we live with multiple other members of the team for an extended amount of time. This always forges friendships that didn’t exist prior to January. So many team memories are made during this time, which is why I already look back on the experiences so fondly,” said Korsberg. “Training trip is without a doubt one of the most important aspects of our season, and it would not be possible without Swim School.”