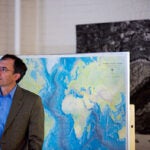 Earth’s sister in the crosshairs

Harvard scientists are helping to paint the fullest picture yet of how a handful of factors, particularly a worldwide increase in atmospheric carbon dioxide, combined to end the last ice age 10,000-20,000 years ago.

As described in a paper published April 5 in Nature, researchers compiled ice and sedimentary core samples collected from dozens of locations around the world, and found evidence that while changes in the planet’s orbit may have touched off a warming trend, increases in CO2 played a far more important role in pushing it out of the ice age.

“Orbital changes are the pacemaker. They’re the trigger, but they don’t get you too far,” lead author Jeremy Shakun, a visiting postdoctoral fellow in earth and planetary sciences, said. “Our study shows that CO2 was a much more important factor, and was really driving worldwide warming during the last deglaciation.”

Though scientists have known for many years, based on studies of Antarctic ice cores, that deglaciations over the past million years and sharp increases in CO2 were connected, establishing a clear cause-and-effect relationship between CO2 and global warming from the geologic record has remained difficult, Shakun said. In fact, when studied closely, the ice-core data indicate that CO2 levels rose after temperatures were already on the increase, a finding that has often been used by global warming skeptics to bolster claims that greenhouse gases do not contribute to climate change.

Many climate scientists have addressed the criticism and shown that the lag between temperature and CO2 increases means that greenhouse gases were an amplifier, rather than trigger, of past climate change, but Shakun and his colleagues saw a larger problem — while CO2 measurements taken from air bubbles in the ice cores reflect levels throughout the global atmosphere, temperatures recorded in the ice only reflect local Antarctic conditions.

To get a more accurate picture of the relationship between global temperature and CO2, the researchers synthesized dozens of core samples — 80 in all — collected from around the world.

“We have ice cores from Greenland; people have cored the sea floor all around the world, they’ve cored lakes on the continents, and they have worked out temperature histories for all these sites,” Shakun said. “Putting all of these records together into a reconstruction of global temperature shows a beautiful correlation with rising CO2 at the end of the ice age. Even more interesting, while CO2 trails Antarctic warming, it actually precedes global temperature change, which is what you would expect if CO2 is causing the warming.

“The previous science clearly said that CO2 had something to do with warming,” Shakun added. “It has gone up and down in tandem with the ice ages, so it is clearly involved. If it was an amplifier, the question was: How big of an amplifier? Does it explain a lot of climate change, or was it a small piece, and other factors were more important? I think this research really points a strong finger at the idea that CO2 was a major player.”

Armed with that evidence, Shakun and colleagues were able to sketch out how a series of factors aligned to eventually set off a worldwide warming trend and the end of the ice age.

Most scientists now believe, Shakun said, that the first domino wasn’t an increase in greenhouse gases, but a gradual change in the Earth’s orbit. That change resulted in more sunlight hitting the northern hemisphere. As the ice sheets over North America and Europe melted, millions of gallons of fresh water flooded into the North Atlantic and disrupted the cyclical flow of ocean currents.

“Ocean circulation works like a global conveyor belt,” Shakun said. “The reason it’s important for climate is because it’s moving heat around. If you look at it today, the northern hemisphere is, on average, a couple degrees warmer than the south, and that’s partly because the ocean is pulling heat northward as it flows across the equator in the Atlantic.

“But if you turn the conveyor belt off, it’s going to warm the south because you’re no longer stealing that heat away. Warming the southern hemisphere, in turn, shifts the winds and melts back sea ice that had formed a cap, trapping carbon in the deep ocean.”

As more and more CO2 enters the atmosphere, Shakun said, the global warming trend continues, “and pretty soon you’re headed out of an ice age.”

While the research strengthens the link between CO2 and the ice ages, Shakun believes it also reinforces the importance of addressing CO2-driven climate change in our own time.

“I don’t think this tells us anything fundamentally new about global warming,” Shakun said. “Most scientists are not in doubt about the human-enhanced greenhouse effect — there are nearly a dozen strong pieces of evidence that it is affecting global climate. This is just one more log on the fire that confirms it.”

Shakun’s research was supported by a National Oceanic and Atmospheric Administration Climate and Global Change Fellowship and by the National Science Foundation, and conducted using resources at the Oak Ridge National Laboratory.