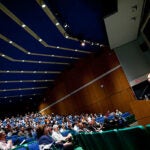 New research from the Harvard School of Public Health (HSPH) suggests that seemingly small changes in summer temperature swings — as little as 1°C more than usual — may shorten life expectancy for elderly people with chronic medical conditions, and could result in thousands of additional deaths each year. While previous studies have focused on the short-term effects of heat waves, this is the first study to examine the longer-term effects of climate change on life expectancy.

The study was published online April 9 in the Proceedings of the National Academy of Sciences.

“The effect of temperature patterns on long-term mortality has not been clear to this point. We found that, independent of heat waves, high day-to-day variability in summer temperatures shortens life expectancy,” said Antonella Zanobetti, senior research scientist in HSPH’s Department of Environmental Health and lead author of the study. “This variability can be harmful for susceptible people.”

In recent years, scientists have predicted that climate change will not only increase overall world temperatures but will also increase summer temperature variability, particularly in mid-latitude regions such as the mid-Atlantic states of the United States and sections of countries such as France, Spain, and Italy. These more volatile temperature swings could pose a major public health problem, the authors note.

Previous studies have confirmed the association between heat waves and higher death rates. But this new research goes a step further. Although heat waves can kill in the short term, the authors say, even minor temperature variations caused by climate change may also increase death rates over time among elderly people with diabetes, heart failure, chronic lung disease, or those who have survived a previous heart attack.

The researchers used Medicare data from 1985 to 2006 to follow the long-term health of 3.7 million chronically ill people over age 65 living in 135 U.S. cities. They evaluated whether mortality among these people was related to variability in summer temperature, allowing for other things that might influence the comparison, such as individual risk factors, winter temperature variance, and ozone levels. They compiled results for individual cities, then pooled the results.

Mortality risk was higher in hotter regions, the researchers found. Noting that physiological studies suggest that the elderly and those with chronic conditions have a harder time than others adjusting to extreme heat, they say it’s likely these groups may also be less resilient than others to bigger-than-usual temperature swings.

“People adapt to the usual temperature in their city. That is why we don’t expect higher mortality rates in Miami than in Minneapolis, despite the higher temperatures,” said Joel Schwartz, professor of environmental epidemiology at HSPH and senior author of the paper. “But people do not adapt as well to increased fluctuations around the usual temperature. That finding, combined with the increasing age of the population, the increasing prevalence of chronic conditions such as diabetes, and possible increases in temperature fluctuations due to climate change, means that this public health problem is likely to grow in importance in the future.”

Support for the study was provided by the Environmental Protection Agency and the National Institute of Environmental Health Sciences.