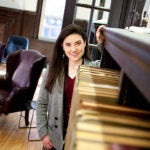 The story of the girl with pink sneakers

On Nov. 1, 1818, in quiet Harvard Yard, undergraduates gathered for Sunday dinner at University Hall. As usual, each of the four classes assembled in its own dining room on the first floor. It was a peaceful collegiate scene, typical of Harvard in that period.

Then all hell broke loose. A major food fight set off a cascade of disturbances, and within a week the entire sophomore class was expelled.

Harvard’s era of dissent began with the “Great Butter Rebellion” of 1766. It was the first known student protest on an American campus and for a time led to half the student body being suspended. Asa Dunbar, Henry David Thoreau’s grandfather, was the first to protest that College butter “stinketh,” setting in motion a familial ethic of civil disobedience.

The Rebellion of 1818 began, you might say, over interior design. University Hall was only three years old, but despite its handsome Chelmsford granite and its Charles Bulfinch lines, the new hall wasn’t a good model for undergraduate dining. The rooms for each class were connected by large openings that made it easy for students eventually to throw food, furniture, and handy projectiles at rival classes. The adjoining chambers, wrote one contemporary, were like barrels of gunpowder stacked side by side.

On that Sunday night, there was no “government” — a word then used at the College to describe adult authority. Someone threw a slice of buttered bread, setting off a melee. The weapons of choice included “hot coffee, tea cups and saucers, plates, and finally billets of wood,” wrote Mary Prescott, who summarized witness accounts in a letter to her brother Charles, a Class of 1821 dropout.

Augustus Peirce, a 17-year-old junior, commemorated the food fight in “Rebelliad,” a mock-heroic poem that was popular underground reading at Harvard for decades:

“And thus arose a fearful battle,”
The coffee cups and saucers rattle;
The bread-bowls fly at woful rate,
And break many a learned pate.”

Mary Prescott disapproved of the fray but admitted in her letter that it “began probably in jest.” But it was no jest to College authorities. Earlier that term the sophomore class had paid a heavy fine for breaking most of the College’s crockery in a similar fray. Now most of it was broken again. Two sophomores were suspended right away, and more were suspended the next day after a noisy confrontation with John Brazer, a strict and pious professor of Latin. The crowd, Prescott wrote, “hissed and insulted him.”

On Nov. 6, the situation turned worse. Irate sophomores gathered under the “Rebellion Tree” near Hollis Hall to protest the suspensions. Members of the College administration swooped across the Yard to disperse the crowd. In the lead was John Snelling Popkin, a dry-witted professor of Greek known as “Old Pop.” A figure of fun among undergraduates, he was a punctilious, old-school grammarian who had the curious habit of ending his sentences with a whistle. The rebellious sophomores danced in a circle around Popkin, wrote Prescott, “mimicking and holloaing like so many wild Indians.”

The College suspended five more students that day, and “rusticated” three, expelling them temporarily. By then, the number of suspensions stood at 12. Among the first had been food fighter (and future physician) David Wood Gorham. He later wrote to Charles Prescott praising “our rebellious class,” and allowing himself “a little puff of vanity” for his role in the disorder.

After Popkin was mobbed at the Rebellion Tree, the entire sophomore class of 80 — including future literary light Ralph Waldo Emerson — declared the suspensions a form of tyranny and resigned from Harvard en masse. President John Thornton Kirkland set aside his usual leniency and called a meeting of the Harvard Corporation for Nov. 9. The corporation agreed to formally expel the sophomore class, and bring back only those students “who had taken little share in the resistance.”

A week later, Emerson, a bit player in the rebellion, was among a group of 30 or so who applied to be readmitted. Kirkland demanded that they write “an expression of readiness to submit” to College laws.

Under Kirkland’s light discipline, interclass battles were common, tutors were physically intimidated, and the Yard at night was often a cacophony of smashing windows and minor explosions. Undergraduates fought in town-gown brawls on Cambridge Common and engaged in epic drinking bouts that often stopped only in time for morning chapel services.

Just five years later Kirkland imposed another mass expulsion, of 45 seniors on the eve of their graduation. (“The Class of 1823,” Harvard historian Samuel Eliot Morison wrote in 1936, “was uncommonly rowdy.”)

Harvard was by no means the only rowdy campus, and disturbances there could be described mostly as pranks. Undergraduates dumped buckets of water and ink on classmates suspected of being cooperative with authorities. The students spiked firewood with gunpowder, rolled stolen cannonballs down stairways, and engaged in mass chair-scraping during chapel services.

At Yale, things were rougher. Between 1843 and 1858, students carried arms, stabbed tutors, built barricades, engaged by the hundreds in town-gown brawls, and shot two New Haven firemen to death.

The hundred-year era of collegiate mob action had many causes, scholars say. Between the American Revolution and the Civil War, students felt a growing disenchantment with college authority. These sons of patriots inherited a hunger for liberty, but lacked a national stage and a real crisis to snare their attention. Until the Civil War, students contented themselves with burlesques of rebellion.

At the same time, older students were entering college in larger numbers. (By 1800, a fifth of students enrolling at Harvard were adults.) Naturally, they chafed at strict campus rules written in the 17th century. Still, most undergraduates were quite young. (Students could be admitted to Harvard at age 12.) They brought with them what Allmendinger called “the eternal roughness of schoolboys.” Additional trouble arrived when such youth was mixed with untrammeled drinking, lax boarding arrangements, proliferating social clubs, and — at Harvard — the proximate temptations of Boston just a toll bridge away.

By 1829, the man that students called “jolly old Kirkland” was replaced by Josiah Quincy III, a hardheaded judge and steely Federalist veteran of the U.S. House. The 1790 Harvard graduate had just finished six terms as mayor of Boston and pledged to bring order to the College by making students subject to state civil and criminal laws. That idea, wrote historian Robert A. McCaughey, Ph.D. ’69, upended “the ancient rules of campus warfare.”

Quincy was a law-and-order president. Morison once described him as leaping from his carriage on Massachusetts Avenue and herding brawling students back into the Yard with a bullwhip. His tactics worked — until the Rebellion of 1834.

During a recitation that May, a freshman challenged the authority of his 22-year-old Greek instructor, setting loose an anti-authoritarian tumult that widened to other classes. Students torched a recitation room, assaulted two night watchmen, exploded a device in Holden Chapel, and hanged Quincy in effigy — stuffed with gunpowder and set alight — from the Rebellion Tree. Within two weeks, the student body was in open revolt.

Order was only restored three months later. The entire sophomore class was expelled, along with six freshmen, one junior, and seven seniors. Three students were slapped with criminal indictments.

During his presidency, Quincy doubled the endowment, introduced electives, and in 1836 presided over a 200th anniversary Commencement that introduced Harvard — shy about celebrating itself until then — as a University ready to grow beyond its frontier beginnings.

But increased personal discipline among students may have been Quincy’s real legacy. When he retired in 1845, a faculty member wrote the aging autocrat a letter of praise for showing students that it was “necessary, as well as honorable, to obey.”