Guthrie in the outdoors 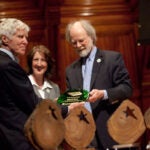 Harvard University announced today that it will host a live outdoor simulcast of the American Repertory Theater’s (A.R.T.) production of “Woody Sez: The Life and Music of Woody Guthrie” on May 17.

The show, which is believed to be the first live outdoor simulcast of a theater production outside of New York, will be presented in collaboration with the University’s Common Spaces Initiative and the A.R.T. The screening will take place in the plaza next to the Science Center. It will be preceded by a live performance at 6:30 p.m. by Sarah Lee Guthrie, Woody Guthrie’s granddaughter, programmed by the famous Club Passim.

The simulcast from the Loeb Drama Center will begin at 7:30 p.m. After the show, performers will join the simulcast audience in the plaza for a celebration of the centennial of Woody Guthrie’s birth, including a cake and a hootenanny. Audience members are encouraged to bring their own instruments and join the party. A large tent will be erected at the plaza in case of rain. A concessions stand and a cash bar will also be open during the performance.

The simulcast is one of several arts events taking place throughout the year as part of Harvard’s 375th anniversary celebration. The Common Spaces Initiative seeks to foster a greater sense of community across Harvard by providing students, faculty, and staff with opportunities to share spaces and experiences.

The event is free and open to the public, but tickets will be required. They can be obtained from the Harvard Box Office beginning May 3. There will be a limit of four tickets per person, pending availability. Tickets obtained by phone and online will incur a processing fee. For more information, visit the Harvard box office website.

One of the most influential songwriters and balladeers of the 20th century, Guthrie transformed folk music into a vehicle for social protest and captured the adversity and hardship of a generation during the Great Depression. His music and activism paved the way for many great American music makers including Bob Dylan, Bruce Springsteen, and Johnny Cash.

“Woody Sez” is a moving theatrical portrait that uses his words and songs, performed by a company of four singers and instrumentalists who play more than 20 instruments, to transport the audience through Guthrie’s intriguing and sometimes tragic life.