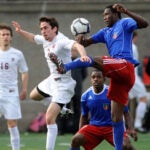 Gathering under gray skies, Harvard undergraduates gleefully covered one another in bright colors on March 24 in observance of Holi, the Hindu celebration of spring. The event, which drew more than 200 undergraduates from a range of religious and cultural backgrounds, was hosted by Dharma, Harvard’s Hindu Student Association.

“Holi is primarily a celebration of the coming of spring and commemorates various aspects of Hindu mythology,” said Neil Patel ’13, co-president of Dharma. “The festivities usher in spring and the season of love.”

The celebration took place on the Malkin Athletic Center quad, as it has each spring since 1998. Students covered one another in powders colored red, yellow, and blue.

Patel says that stories regarding the religious significance and origins of the festival vary across different regions in India. While most Hindus view Holi as a celebration of the coming of spring, in some traditions the celebration serves as a commemoration of the divine love of the goddess Radha for Lord Krishna.

Patel says that Holi also breaks down barriers among people of different classes and backgrounds.

“The spirit of the festival closes gaps between social classes and brings individuals together as everyone throws colors at each other,” he says. “In some parts of India, children spend the day taunting and throwing colored powder and colored water at adults and elders in the streets. My roommate observed that everyone seemed to look the same after throwing colors at each other. In a broader sense, the festival celebrates the oneness of humanity.”

Celebrants also enjoyed traditional Indian snacks, along with games like kabbadi, a kind of rugby-tag, and carrom, a billiards-like board game. Patel says that the fun and food attract more participants to Holi every year. So does the way that the festival brings people together.

“Holi is a wonderful opportunity to share South Asian and Hindu culture with the broader Harvard community,” he says. “For many students, throwing colors at friends serves as a liberating way to welcome the spring season — and potentially get revenge on the roommate that stole your food. As we defy conventions and throw colors at friends, we celebrate the unity of the Harvard community as a whole.”