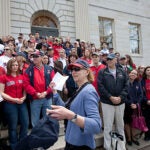 Harvard President Charles Eliot once famously decried the sport of baseball for its deceptive practices.

“Well, this year I’m told the team did well because one pitcher had a fine curveball. I understand that a curveball is thrown with a deliberate attempt to deceive,” he said. “Surely this is not an ability we should want to foster at Harvard.”

For Eliot, rowing was one of the true honorable sports. (Tennis was the other.) And at Eliot House, the river House named for Harvard’s longest-serving president, crew is king.

The Eliot House courtyard graciously opens out onto the Charles and the boathouse. Many new residents arrive at the House with no rowing experience, but find themselves drawn to the water in the early morning, seeking that serene feeling when a boat glides across the water, with the team of eight rowers, guided by their coxswain, working as one.

Former House Master Lino Pertile made crew a priority. At the Charles Eliot dinner, Pertile would evoke the ghost of Eliot as a mythical inspiration, with him talking to rowers and offering words of wisdom and encouragement: “Fly like the wind and bring glory to Eliot House.”