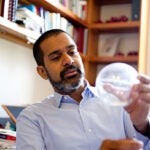 Self-assembly as a guide

Harvard scientists have taken a critical step toward building a quantum computer — a device that could someday harness, for example, the intrinsic properties of subatomic particles such as electrons to perform calculations far faster than the most powerful supercomputers.

As described in a paper published April 13 in Science, researchers have, for the first time, demonstrated a system in which two semiconducting spin quantum bits, or qubits, interact with each other in a process known as entanglement. Without that entanglement, quantum computers simply can’t exist.

“Entanglement is an essential component of quantum computing — it’s what gives you the ability to do generalized, universal quantum computation,” said Amir Yacoby, professor of physics and of applied physics, who led the research. “Without this kind of entanglement, there’s no way to get anywhere in this field.”

Quantum computers rely on quantum mechanical properties of particles to store data and perform computations. Unlike the transistors used in digital computers, which encode data “bits” as either zero or one, qubits can hold both values simultaneously. In theory, that inherently parallel nature allows quantum computers to be vastly more powerful than traditional computers, which perform operations in sequence.

As a first step toward making those parallel computations possible, researchers working in Yacoby’s lab have established a new method for creating an entangled state between two qubits. By taking advantage of the electrostatic interaction between the particles, Yacoby, in collaboration with postdoctoral researchers Oliver Dial and Hendrik Bluhm, and graduate students Michael Shulman and Shannon Harvey, was able to create pairs of qubits in a state that has no classical analog, known as an entangled state.

By entangling one qubit with another, researchers can control the state of one qubit by operating on the other. This interconnectedness gives quantum computers their advantage over their classical counterparts.

“There are two elements to this paper,” Yacoby explained. “The first is determining how to create these entangled states. We took advantage of the fact that our qubits are made of electrons, so we used their electrostatic interaction to create this conditional, or entangled, state between them. As a method for creating entanglement, that has not been demonstrated before.

“The second element in the paper is that the electrostatic interaction is weak, so it takes time to create that entanglement,” Yacoby continued. “But during that time, various elements are trying to interact with the individual qubits, which cause them to lose their information. It took some creative thinking to design a system that would allow their entanglement to accumulate, but would limit their interaction with the rest of their environment.”

As Shulman put it, “The trick is to keep them sensitive to each other, and to nothing else.”

The solution, Yacoby said, came in the form of an echo. Though subtle fluctuations in the evolution of each qubit cause the entangled qubits to get out of sync, researchers found a novel way to solve the problem. They allowed the qubits to interact for a precise amount of time, then flipped each qubit, causing them to return to their initial state.

The method has two benefits, Yacoby said. First, allowing a pair of qubits to interact builds the necessary entanglement between them. Second, bringing the bits back to their initial state preserves the data that had been coded into them.

“You can think of it like runners on parallel tracks,” Yacoby said. “They run a certain distance, and then on cue they turn and run back the same amount, so they wind up back where they began.”

Similar to traditional computers, Yacoby’s design for a quantum computer begins with a thin wafer of semiconducting material — in this case gallium arsenide — “grown” in the Weizmann Institute. Researchers then deposit nanometer-size wires onto the wafer to form metal “gates.” The entire device is then supercooled to a few hundredths of a degree above absolute zero to slow the motion of atoms in the wafer. When attached to an electric voltage, the gates trap electrons, allowing researchers to construct their quantum bits.

“Conceptually, people had laid out the idea that this type of entanglement was possible as early as 15 years ago, but the gap between being able to conceive of something and demonstrating it in a real system is huge,” Yacoby said. “It’s huge in the sense that, when people were laying out these concepts, they didn’t take into account all the problems that exist in a real system. Just because nature doesn’t fundamentally forbid it, doesn’t mean it can be done. But the fact is it can be done, it can be done today, and it can be done quite elegantly.”