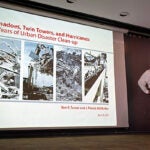 How to organize chaos

The event, “What is Your N? A Personality Test for 4 AM Philosophers,” featured a conversation between social psychologist Dan Gilbert and economist N. Gregory Mankiw, and was sponsored by the Harvard University Initiative on the Foundations of Human Behavior. The discussion was moderated by professors Nicholas Christakis of Harvard Medical School and the Department of Sociology and David Laibson of the Department of Economics.

Laibson began the debate with the following thought experiment:

“We have pre-selected 100 different bottles of alcohol, covering all popular categories — beer, wine, rum, gin, vodka, whiskey, etc.  Another person (who remains anonymous) is going to take one (regular-sized) drink, poured from one of the 100 bottles.  Call him/her the recipient.

Your job is to pick N so as to maximize the happiness of the recipient.”

Next, Laibson asked the group to choose the number of bottles that they would send to the recipient under two different scenarios. In the first, the recipient would never know that there were 100 bottles to begin with. In the second scenario, he or she would.

As the students tapped on their laptops to submit their responses to the question online, Mankiw and Gilbert had at it. Mankiw kicked off the discussion by saying that the answer was easy for him and, he hoped, for anyone who had taken his introductory economics class. He would send the anonymous stranger all 100 bottles. Without any knowledge of the recipient’s tastes, it made sense to send as many bottles as possible in order to increase the chance that the stranger would get a drink that they would like.

“My wife and I [recently] went to a bar and had a drink and dinner,” he explained. “The bar had a big selection. I had no trouble at all. I said ‘I want a Tanqueray martini on the rocks with a twist.’ If the bartender had said ‘We randomly reduced the number of selections, so we don’t have Tanqueray tonight. We have Bombay Sapphire,’ I would have been a little disappointed. If they had said ‘We only have Gordon’s gin tonight,’ I would have been really upset. And if they had said ‘All we have is Kahlua, and crème de menthe,’ I would have walked out. So it was very clear to me that more selection is good.”

Gilbert said that Mankiw’s answer was not surprising. Americans like choices; the more the better. We want to choose what we want, even if the options are so great that our decision becomes essentially random. But Gilbert said there is more to choice than simply matching selection with preferences, and that there are costs associated with decision making, particularly when the options are too great. To illustrate his point, Gilbert described a study by Princeton psychologist Eldar Shafir.

Shafir presented doctors with a pink pill that was said to treat osteoarthritis. The physicians learned about the drug, and then were asked whether or not they would be likely to prescribe it. Most said that they would.

Shafir then went to another group of physicians, this time with a pink and blue pill. He told the group that both would treat osteoarthritis and that the drugs were similar in their effects, aside from their color. He asked this group of doctors whether they would prescribe the pink pill, the blue pill, or neither. Fewer doctors said that they would give patients a pill — either pink or blue — than the group that had been presented with only one pill.

“You should get at least the same number prescribing one of the pills,” said Gilbert. “Or even more, because some will only like blue pills. However, the actual number goes down. Why? Because the physicians say ‘Well, I could do nothing, or choose between one of these two similar pills and I really can’t decide between them, so I’ll do nothing, because nothing looks really different than the pill.”

In terms of Laibson’s thought exercise, Gilbert noted that more bottles and more types of liquor could make the decision more difficult for the recipient. If you offer the drinker wine or beer, and the drinker likes wine, the choice is easy. But if the drinker likes wine and gets four different bottles to choose from versus one type of beer, they might actually choose the beer, even though they prefer wine.

“Because I’ve given you extra choices, you have now gone to the thing you like less, because you can’t think of a good reason to pick among the wines that are so similar,” Gilbert said.

After some waffling, Gilbert, half seriously, gave the number of bottles he would send to the stranger: two.

“Then you have only Kahlua and crème de menthe!” laughed Mankiw.

After Gilbert and Mankiw held forth, Laibson revealed the results of the online poll. Under conditions where the recipient would not be informed if their choices were narrowed, there was a barbell-shaped distribution. A large group of the 220 student respondents said that they would send between zero and 30 bottles to the drinker, with another group up at 100 bottles. In the second scenario, however, where the recipient would know if the selection had been pared, undergraduates overwhelmingly voted to send all 100 bottles to the drinker.

The results were fascinating to Laibson, who has studied employee participation in retirement plans and discovered that enrollment increases dramatically when workers are automatically enrolled and must voluntarily opt out. Given that the criticism for making auto enrollment the default in business is often that the policy is paternalistic, the results of the survey shed light on when people are OK with “Big Brother” and when they are not.

“The message here seems to be ‘Be a paternalist, but keep it a secret,’” Laibson said, eliciting laughter from the students. “The minute the recipient knows [his or her choices have been narrowed], this community gives a different answer [to the thought experiment]. Paternalism is bad when the recipient understands that paternalistic motives organize what happens to them.”