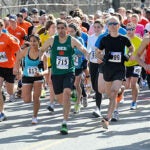 Chasing down a better way to run

Harvard stem cell researchers at Massachusetts General Hospital (MGH) have taken a critical step toward discovering in the relatively near future a drug to control cystic fibrosis (CF), a fatal lung disease that claims about 500 lives each year, with 1,000 new cases diagnosed annually.

Beginning with the skin cells of patients with CF, Jayaraj Rajagopal and colleagues first created induced pluripotent stem (iPS) cells, and then used those cells to create human disease-specific functioning lung epithelium, the tissue that lines the airways and is the site of the most lethal aspect of CF, where the genes cause irreversible lung disease and inexorable respiratory failure.

That tissue, which researchers now can grow in unlimited quantities in the laboratory, contains the delta-508 mutation, the gene responsible for about 70 percent of all CF cases and 90 percent of the ones in the United States. The tissue also contains the G551D mutation, a gene that is involved in about 2 percent of CF cases, and the one cause of the disease for which there is now a drug.

The work is featured on the cover of this week’s journal Cell Stem Cell, which appeared online today. Postdoctoral fellow Hongmei Mou is first author on the paper, and Rajagopal is the senior author.

Mou credits learning the underlying developmental biology in mice as the key to making tremendous progress in only two years. “I was able to apply these lessons to the iPS cell systems,” she said. “I was pleasantly surprised the research went so fast, and it makes me excited to think important things are within reach. It opens up the door to identifying new small molecules [drugs] to treat lung disease.”

Doug Melton, co-director of the Harvard Stem Cell Institute (HSCI), said, “This work makes it possible to produce millions of cells for drug screening, and for the first time human patients’ cells can be used as the target.”

Melton, who is also co-chair of Harvard’s inter-School Department of Stem Cell and Regenerative Biology (SCRB) and is the Xander University Professor, added, “I would expect to see rapid progress in this area now that human cells, the very cells that are defective in the disease, can be used for screening.”

Rajagopal said that “the key to our success was the ecosystem of the Harvard Stem Cell Institute and MGH. HSCI investigators pioneered the strategies we used, helped us at the bench, and gave us advice on how to combine our knowledge of lung development with their exciting new platforms. Indeed, we also enjoyed a wonderful collaboration with Darrell Kotton’s lab at Boston University that was able to convert mouse cells into lung tissue.  These interactions really helped fuel us ahead.”

The epithelial tissue created by Rajagopal and his colleagues at the MGH Center for Regenerative Medicine also provides researchers with the same cells that are involved in a number of common lung conditions, including asthma, lung cancer, and chronic bronchitis, and may hasten the development of new insights and treatments into those conditions as well.

“We’re not talking about a cure for CF; we’re talking about a drug that hits the major problem in the disease. This is the enabling technology that will allow that to happen in a matter of years,” said Rajagopal, a Harvard Medical School assistant professor.

Rajagopal, who also is a physician trained as a pulmonologist, the specialty that treats CF patients, said that “when we talk about research and advances, donors and patients ask: ‘When? How soon?’ And we usually hesitate to answer. But we now have every single piece we need for the final push. So I have every hope that we’ll have a therapy in a matter of years.”

Cystic fibrosis, which used to claim its victims in infancy or early childhood, has evolved into a killer of those in their 30s because treatments of the infections that characterize the disease have improved. But despite those advances, there has been little progress in treating the underlying condition that affects the vast majority of patients: a defect in a single gene that interferes with the fluid balance in the surface layers of the airways, and leads to a thickening of mucus, difficulty breathing, and repeated infections and hospitalizations.

The discovery and recent FDA approval of the drug Ivacaftor, which corrects the G551D defect seen in about 2 percent of CF patients, has served as a proof of concept to demonstrate that the disease can be attacked with a conventional molecular treatment. In fact, Ivacaftor was found by screening thousands of drugs on a far less than ideal cell line.  In the end, many drugs that functioned well on this cell line proved ineffective when used on genuine human airway tissue.  Genuine human airway tissue is the gold standard prior to drugs being tested clinically, but it has been extremely difficult to obtain the tissue from patients, and when it could be obtained, it rarely survived long in the lab — all of which created a major bottleneck in screening for a therapy.

But by creating iPS cells that contain the entire genome of a CF patient, and directing those cells to develop into lung progenitor cells, which then develop into epithelium, the group appears to have solved this key problem.

Rajagopal, who did his own postdoctoral fellowship in Melton’s laboratory during the first half of the past decade after completing his training in pulmonary medicine, said that having both the G551D and 508 genes in the epithelial tissue provides a way to prove that the tissue will be effective in testing drugs against CF.

“We’ve created the perfect cell line to show that the drug out there that works against G551D mutation works in this system, and then we’re in business to screen for a drug against delta 508,” he said. “We’ll know soon that the cell line works. We know it makes bona fide airway epithelium, and we’ll have the proof of principle that the drug responds properly to the only known drug. We think this is the near-ideal tissue platform to find a drug for the majority of CF.”

Rajagopal’s lab has created numerous other cell lines to further show that a CF drug that works in one patient should work in others, and to see whether this will be an area that allows a more personalized approach to medicine.

“I’m most looking forward to working with the community of pulmonologists that concentrate in CF to generate therapies. This is occurring more than two decades after the remarkable work that identified the CF gene. Looking forward, I’m very excited that CF may lead the way in lung disease once more, by demonstrating that our iPS platform can be used to probe the diseases that are much less well understood.  CF has more than two decades of great biology behind it. The reason we chose to attack this disease first was because of that pioneering work that lets us use our system with a very firm foundation,” Rajagopal said.