Beyond the ivory tower, into the world 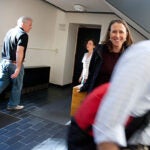 The future of self-knowledge

When Harvard President Drew Faust interviewed former Mexican Minister of Health Julio Frenk about becoming the public health dean, Frenk asked her why she was interested in him for the post.

“Because I am deeply interested in the role that universities have in tackling the biggest problems facing humankind,” Faust responded.

Faust’s words were just what Frenk wanted to hear. He took the job in 2009 and has made it his mission to ensure that the work going on at the Harvard School of Public Health (HSPH) doesn’t just sit in academic journal archives, but reaches government officials, policymakers, and health care professionals on the ground who can put it to use.

The emphasis on translating public health research into concrete implementation led to creation of the Division of Policy Translation and Leadership Development, which aims to provide HSPH faculty members with the tools they need to ensure that their research is incorporated into policy.

In addition, the division recognizes that the lessons of leadership flow both ways and is working to bring hard-won experience into the School through a new senior fellowship program and an outreach program aimed at sitting ministers of health. These efforts are part of an overall strategy to adjust the orientation of the School toward a broker’s role of bringing evidence into policy, as well as serving as an expert convener in times of crisis.

Frenk is passionate about the topic. He says that universities should participate in the entire circle of knowledge: its production through research, its reproduction through teaching, and its translation. That translation can come through the creation of new things — vaccines, software, and devices — or by sharing the knowledge generated by one of the largest public health research institutions with those working to improve the world.

In creating the division, HSPH looked to Harvard Business School, Harvard Law School, and Harvard Kennedy School, which have close ties to executives running companies, to practicing judges and lawyers, and to sitting government officials, and for whom knowledge flows in a two-way stream from the Schools to those working in the field and back.

With modern technology producing new, sophisticated ways to communicate instantly with policymakers and practitioners around the world, the division has built a state-of-the-art studio on the 10th floor of HSPH’s Kresge Building. The Leadership Studio seats up to 40 and can host a variety of functions, from video conferences with multiple global participants, to faculty interviews for TV news shows, to the division’s crown jewel, a regular webcast examining public health issues, The Forum at Harvard School of Public Health.

The forums take advantage of the studio’s advanced HD technology to connect expert panelists with viewers globally, offering a professionally produced program with interactive features for viewer comment. The 15 forums held so far have drawn viewers from 162 countries and have featured such prominent speakers as U.S. Attorney General Eric Holder, philanthropist Ted Turner, and Massachusetts Gov. Deval Patrick. An emergency program immediately following the 2011 Japanese earthquake and tsunami connected humanitarian disaster and radiation experts at Harvard with officials in Tokyo.

A recent program on sleep deprivation, aired just before the “spring ahead” into daylight saving time, drew 652 viewers to the live webcast but was viewed 6,000 times on the Web during the following week. When YouTube clips, tweets, Facebook posts, transcript downloads, and other forms of interaction are included, 26,000 people engaged with the program in some way, according to Forum Director Robin Herman, who also serves as the division’s deputy director.

“The Leadership Studio is a megaphone for our faculty,” Herman said. “We also call it ‘a Swiss army knife of communications capabilities.’ It’s a pretty nice-looking room as well.”

In collaboration with the Harvard Kennedy School, the division seeks to open the flow of knowledge among sitting ministers of health and HSPH. According to Michael Sinclair, executive director of the division’s Ministerial Leadership Program, an inaugural event planned for June will feature 20 sitting ministers of health and is intended to be an exchange of information, with the ministers drawing on their own experiences to encourage a dialogue among colleagues. Harvard faculty members, Blendon said, will be there to help and to provide information where needed, but not necessarily to “teach” as in a typical classroom.

The result, organizers hope, will be an experience that also creates a network of high-level individuals who can help each other tackle the problems that their nations face.

Among those attending will be Sujatha Rao, former secretary of health and family welfare of India. Rao is also a senior leadership fellow, part of another new division program whose aim is to build closer ties to experienced health policy leaders.

Rao has been interacting with HSPH faculty members, giving public talks, and, once a week for the three-month fellowship, teaching a seminar to HSPH students, sharing lessons learned in her years in a job that kept her busy “six and a half days a week” formulating budgets, testifying in Parliament, meeting with state officials, and talking to the media.

“I think it can be an invaluable thing [to students]. You really are able to tell what happens in the real world. It’s not all black and white,” Rao said.

The division recently learned that it won a Hauser Grant from the Harvard Initiative for Learning and Teaching for a new project to edit video from prominent visitors into clips usable in classroom teaching.  The division also includes several existing programs whose missions fit with the new emphasis on leadership, engagement, and implementation. HSPH’s Center for Continuing Professional Education plans to greatly expand its role for executive and leadership training.

All in all, Frenk said, by forging closer ties to those tackling the world’s knotty public health problems, the flow of knowledge from HSPH to practitioners will improve, and so will the education of tomorrow’s public health leaders.

“In addition to having superb researchers, we educate a lot of implementers. Many of our students are going to be leaders in professional practice and policymaking,” Frenk said. “This is a time of great opportunity.”