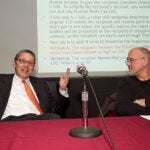 Saint Lawrence, who was burned to death on a large grate over a fire, is said to have remarked to his tormentors: “Turn me over, I’m done on this side.”

Such audacity — not to mention savagery — not only ensured that the tale would be handed down through generations, it made Saint Lawrence of Rome the patron saint of barbecue. Lawrence’s story was among those shared Tuesday by famed barbecue aficionado Steven Raichlen, who spoke before a packed house at Harvard’s Geological Lecture Hall.

Raichlen, author of “The Barbecue Bible” (1998) and “Planet Barbecue” (2010), took the audience on a tour spanning millions of years and thousands of miles, touching on barbecue’s origins among early humans and on different barbecue customs around the world.

The talk was sponsored by the Peabody Museum of Archaeology and Ethnology and the School of Engineering and Applied Sciences. Raichlen was introduced by Professor Richard Wrangham, whose research focuses on the idea that cooking, because it makes food more digestible and nutrients more accessible, was an important part of human development. Raichlen said he has been influenced a great deal by Wrangham’s ideas about cooking and human evolution.

During his two-day visit, Raichlen also stopped at a human evolutionary biology class taught by Wrangham and Professor Noreen Tuross to direct a barbecue including foods that Homo erectus might have eaten — buffalo, halibut, and trout — in the courtyard near the Tozzer Library.

Barbecue reaches millions of years into human history, but our earliest ancestors were small-brained plant eaters, as evidenced by their massive jaws. A raw plant diet, Raichlen said, dictated that they spend many of their waking hours gathering food and chewing.

Our first ancestor that cooked was Homo erectus, 2 million years ago, Raichlen said. The taming of fire and increased amount of meat in our diets coincided with the expansion of our brain size, Raichlen said. It also fostered community as people gathered around the fire to eat.

The first “barbecue” is lost in history, but likely was accidental — an animal caught in a lava flow or a forest fire.

“Someone tasted it, and uttered the first grunt of gastronomic pleasure in history,” Raichlen said.

Fire at first was something harvested from wildfires, tended and kept alive in an early division of labor, Raichlen said. Eventually, primitive people learned how to start their own fires, striking stones together or using a bow to generate friction.

Over the years, humans became proficient hunters and cooks, hunting some species to extinction. Religious custom dictated the sacrificing of animals that led to their being cooked and eaten. The word barbecue is thought to have originated with Taino Indians who prepared meat on a grate that, because it was made of wood, encouraged cooking at low temperatures for long periods of time to avoid the grate burning up.

For “Planet Barbecue,” Raichlen traveled to 60 countries to discover barbecue techniques. He described a wide variety of cooking methods and foods to the audience, from a traditional Indian tandoor to Jamaican jerk barbecue, from grilled eel in Korea to kangaroo in Australia, from grilled octopus in Greece to grilled eggs in Cambodia.

“It’s been 2 million years, an incredible ride,” Raichlen said. “I think you can truly say that barbecue begat civilization.”