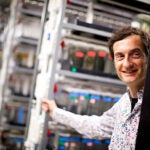 Antibiotic-resistant bacteria continue to be a global concern with devastating repercussions, such as increased health care costs, potential spread of infections across continents, and prolonged illness.

However, researchers at Harvard-affiliated Brigham and Women’s Hospital (BWH) could change the playing field of man versus bacteria. Charles Serhan, the Simon Gelman Professor of Anaesthesia at Harvard Medical School (HMS), and director of the BWH Experimental Therapeutics and Reperfusion Injury Center, has identified pathways of naturally occurring molecules in our bodies that can enhance antibiotic performance.

The study was published electronically today in Nature.

Mice infected with Escherichia coli (E. coli) or Staphylococcus aureus (S. aureus) bacteria were given molecules called specialized pro-resolving mediators (SPMs) along with antibiotics. SPMs are naturally found in our bodies, and are responsible for mediating anti-inflammatory responses and resolving inflammation. An anti-inflammatory response is the body’s attempt to protect itself from infectious agents and initiate the healing process.

The researchers found that specific types of SPM molecules, called resolvins and protectins, were key in the anti-inflammatory response to limit tissue damage by stimulating the body’s white blood cells to contain, kill, and clear the bacteria.

Administered with antibiotics, resolvins and protectins heightened immune response by commanding white blood cells to attack and engulf the bacteria, thereby quickly reducing the amount of bacteria in the blood and tissues.

RvD5 — a type of resolvin — in particular was also helpful in regulating fever caused by E. coli, as well as counterregulating genes responsible for mounting excess inflammation associated with infections; hence, limiting the collateral damage to the body while fighting infection.

Serhan and colleagues are the first to demonstrate RvD5, as well as its actions against bacterial invasion.  The BWH team, collaborating with Fredrik Bäckhed of the Sahlgrenska Center for Cardiovascular and Metabolic Research in Sweden, found that germ-free animals produce high levels of resolvins.

When lead study author HMS Assistant Professor of Anesthesia Nan Chiang of the BWH Experimental Therapeutics and Reperfusion Injury Center, added these natural mediators together with antibiotics, less antibiotic was needed. This demonstrated for the first time that stimulating resolution programs can limit negative consequences of infection.

“How the body responds to inflammation has been the subject of Dr. Serhan’s work for more than 20 years, and his new study is important for understanding that sequence of events,” said Richard Okita, National Institute of General Medical Sciences, National Institutes of Health, which funded the research. “One of the particularly exciting findings is that SPMs can enhance the effectiveness of antibiotics, potentially lowering the amount needed to treat infections and reducing the risk of bacteria developing resistance.”

According to the researchers, another advantage of SPMs is that, unlike anti-inflammatory drugs (e.g., aspirin, steroids, ibuprofen), SPMs do not cripple the body’s normal immune response.

“Anti-inflammatory agents are widely known to be immunosuppressive,” said Serhan. “Now we have naturally occurring molecular pathways in our bodies that work like these agents and stimulate bacterial containment and resolution of infections, but do not come with the side effect of being immunosuppressive.”