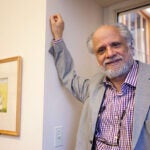 Most writers have a backstory of toiling in obscurity. For Peter Brown, obscurity had a specific location: a basement office in the Littauer Center at the end of a winding hallway, filled with enough spare computer parts to create a tech-savvy Frankenstein’s laboratory.

For the past two decades, Brown has been a systems administrator for Harvard’s Economics Department, the go-to IT guy for Littauer faculty and staff.

“I had pretty much concluded that I was never going to publish a book,” he said.

Then, in 2010, something happened that his economist colleagues might call statistically improbable. Brown won the Katherine Anne Porter Prize in Short Fiction — an award that came with a publishing contract from the University of North Texas Press. His collection of stories, “A Bright Soothing Noise,” showcases the funny, twisted imagination of a writer who, despite years in the hallowed halls of Harvard, hasn’t forgotten the stories of the down-and-out drifters who populated his youth.

The journey took a bit longer than he expected. After growing up on Staten Island, Brown left New York in the ’70s to attend the University of Montana in Missoula, intending to become a poet.

The West, where his artist parents had roots, was a natural fit. He spent much of his time outdoors and hitchhiked to Alaska three times. After college, he saved up to move to Germany, where he worked in a candle factory in Westerwald and squatted in a house in Berlin.

“I basically saw my life as having adventures, chasing girls, and writing poetry,” he said.

When he ran out of money, he returned to the United States to pursue an M.F.A. in creative writing at Columbia University. By the time he finished in 1985, he’d begun to settle down. He married a fellow poet, and three years later had a son. The family moved to Boston, where Brown took a temp job at the Harvard School of Public Health (HSPH). After a few years working at HSPH and then Facilities Maintenance Operations, he made the jump to the Economics Department.

“In many ways, it was a tough time,” he said. “I’d begun my IT career at Harvard, and I had a family. And around that time, I realized I was not going to be a poet.”

Fiction became his creative outlet. “I had to learn a whole new craft, in a sense: how to write a story,” he said. “Once I started doing that, I never really looked back.”

Although he put writing on the backburner for years, he never stopped seeing the world through an author’s gaze.

“Whether or not I was putting pencil to paper, I’ve always been writing,” he said.

Brown insists he keeps his dual personas as writer and IT professional separate. But the quantitative, hierarchical world of the Economics Department “helps sharpen my imagination,” he said. “The experience of working here gives a kind of jaggedness to the way I think about things, the way I write.”

Indeed, his characters are a bit rough around the edges. An American expat abandons his wife and daughters in London for the 15-year-old village girl he loves, only to receive a brutal beating from her less-than-enthused relatives. A love-struck diner waitress serves a couple with a dead infant in tow. An angry New York teenager, forced to move to semirural New Jersey, befriends the pigs he’ll have to lead to slaughter.

“They understood that in a certain light we are all hopeless creatures,” the boy muses about his charges, encapsulating much of the vague longing of Brown’s characters and the often funny, senseless fates that befall them. Brown admits that to those who know him in his everyday life, the book reads unexpectedly dark.

“I have a really good marriage, I have two fabulous children, I have a good job at Harvard, I have a nice house — I have a good life,” he said. “But in my writing, I’m committed to a kind of truth that comes from somewhere else.”

In addition to writing his own book, he translated a book of poems by the French contemporary Emmanuel Merle, set for publication next year, and is working on the first English translation of the poetry of 20th-century French writer Louis Aragon.

He’s 200 pages into writing a novel about a man on an island, which Brown describes as a “cross between ‘Lord of the Flies’ and ‘The Book of Disquiet,’ ” Fernando Pessoa’s posthumous, philosophical head scratcher. (He also co-edits the literary journal “Salamander,” along with his wife.) At 55, he’s hit an artistic stride.

“I think you reach a certain point in life where you’re looking at a tombstone,” Brown said. “When you see your own mortality clearly, it gives you a certain kind of courage. I feel I’ve established for myself a pretty clear sense of what my own courage is — the courage artistically to do what I want.”