At Herbaria, a new career blossoms 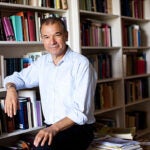 Curatorial assistant left the art world for the natural world

Careful not to disturb her colleagues, Danielle Hanrahan leads a visitor through winding stacks of storage containers housing hundreds of thousands of plant specimens. As the newest curatorial assistant at the Harvard University Herbaria (HUH), she’s still a bit deferential to the staff’s old hands.

But Hanrahan isn’t a recent college graduate in her first job, or even a newcomer to Harvard. Rather, as she tells two co-workers in an apology for a reporter’s unplanned interruption, hers is a tale of starting over.

“I’m part of a story about old people making a comeback,” she says with a self-deprecating shrug.

Going from head of exhibition design and installation at the Harvard Art Museums to a curatorial assistant at an herbarium — from handling the works of major artists to carefully preserving and cataloging humble leaves and twigs — might seem an unusual move. But landing a job at the Herbaria allowed Hanrahan, a longtime lover of both art and science, to pursue the career path not taken.

After 30 years in the art world, 22 of them at the Fogg Museum, she resolved to try something new.

“I decided to jump off the edge of the cliff and see where I was going to land,” she said.

In 2008, the Fogg (which shared a home with the Busch-Reisinger Museum) closed in preparation for a move to a new building, projected to open in the fall of 2014. The next year, Hanrahan was offered the option of working half-time or being laid off.

“It seemed like a really good transition point in my life,” she said. “Things were ending, and I wanted to go down that other road I didn’t go down as a youngster, to pursue something in the natural world.”

She left the museum in 2009 with a plan: to stay at Harvard, to find a job in natural history, and to work in a fun environment. She took classes on plant identification at the Arnold Arboretum (which houses one of the six herbaria that make up the HUH consortium) to familiarize herself with the plant world’s complex taxonomy.

“I sure wish I’d taken Latin in school,” she joked.

She’d long been involved with conservation projects as a volunteer, most recently by acting as a weekend ranger and tending to bluebird boxes at Appleton Farms, one of the oldest continually operating farms in the country. (Just like Harvard, it was established in 1636.)

Last July, she took a temporary job at the Herbaria, mounting new specimens, and was then brought on permanently. She is now working on a collaborative project with the University of California, Berkeley, building a database of California plants that will help scientists track the effects of climate change on different plants’ dispersal across the state.

The job offers constant learning opportunities, she said. The work combines history, geography, and botany, and requires an archivist’s attention to detail. With more than 5 million specimens in the HUH collections, some of them hundreds of years old, nothing can be mishandled or misplaced.

“My colleagues are very generous with sharing their vast knowledge about the plant world,” she said. “They’re supportive and kind. I think that’s really important in a work environment.”

She recognizes how rare her opportunity was. The recession, she said, exposed the difficulties of job seekers like herself: too young and energetic to truly retire, but often viewed by prospective employers as too old to start over in a new field.

“I feel lucky,” she said. “I really do think that a lot of it was being in the right place at the right time. But you have to put the energy out there for anything to come back.”

Hanrahan still makes time for art. She runs her own design and color consulting business, makes and sells bluebird nesting boxes, and serves on the board of Mobius, a local, artist-run nonprofit that supports experimental work.

“I think it’s important to follow your passions,” she said. “They’ll lead you to where you need to be.”