The story of the girl with pink sneakers 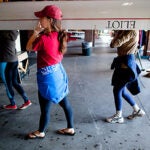 By Alyssa A. Botelho ’13 Harvard College

I did not expect to be overwhelmed in a van’s makeshift waiting room. I was on a reporting assignment for the Harvard Crimson involving the Family Van, a Boston mobile health clinic that provides free health screenings in the city’s rougher neighborhoods.

Among the bustle of visitors — who talked with me about everything from insurance to the Kennedys to tattoos — was a young woman about my age, sporting hot-pink sneakers and hair dyed sun colors. She stepped onboard only briefly, hoisting her baby stroller and calling for the HIV-testing counselor “to pick up my letter.” I was overcome as I watched her vivacious smile: The Family Van only calls home for negative test results. How could I capture the challenges that she would face when she stepped off? How could I tell her story?

Bridging the divide between medicine and its politics is the voice of the journalist. As a student of molecular biology and the history of science, this divide fascinates me. Half of my time in college is dedicated to biochemical research, and the other half to understanding the communication between scientists and the public. As a researcher, I work to emulate my lab-mates, the scientists who tirelessly question their results and the experimental procedures they use to obtain them. As a history student, I am challenged to take scientific facts that seem flat and give them depth. Indeed, straightforward scientific “facts” begin to look more complicated once historians trace them to their discoverers, who were bound to eras and geographies past.

Journalists also trace facts to their sources — but in our era and across our geography. In her book trailer for “The Immortal Life of Henrietta Lacks,” Rebecca Skloot reflects on her decade-long journey threading the narrative of the Lacks family with long-forgotten Johns Hopkins medical records. On the process, she remarks, “Good science is all about following the data as it shows up, and letting yourself be proven wrong, and letting everything change while you’re working on it — and I think writing is the same way.”

I discovered this exhilarating writing process by accident. In my nostalgia for earlier days as a ballet dancer, I decided to write for the Crimson about an art form that I hold dear. After a year of directing arts reporting with my fellow editors on the Crimson Arts Board — a group of vibrant, colorful students who laugh easily, learn in earnest, and always put the story first — I fell in love with the culture of the newsroom. This year, two fellow juniors and I have teamed up to develop the Crimson’s health and science coverage in a biweekly section called “The Cutting Edge.”

The Crimson has been my second home since freshman year, but it was not until I worked at the Nieman Foundation last summer that I became hooked on health and science journalism. Charged with writing profiles of the Nieman’s past global health fellows, I heard the stories of 10 journalists reporting from Hanoi to Harare (and quickly realized that interviewing journalists was an interesting exercise). Hopewell Chin’ono and Ran An reflected on the dangers of reporting on health in the totalitarian regimes of Robert Mugabe and the Chinese Communist Party. Kalpana Jain recounted her struggle to report on AIDS in India during a time when the disease was still condemned as Western propaganda. And Harro Albrecht and Christine Gorman, who both investigated health in Malawi, taught me that stories about disease — though universal — are told best in local contexts. In my Boston locale, I found these kinds of stories in the waiting room of a bus.

After coming across the writing of Tom Paulson, host of the NPR global health blog “Humanosphere,” I began to understand how I could capture the life of the smiling, pink-sneakered girl who would learn of her HIV diagnosis on the Family Van. In a February post, Paulson writes, “If we aren’t careful in how we ‘frame’ this story, we’re at risk of turning this into a story …  about us — rather than about how best to help those most in need.”

Like medicine and science, journalism’s first obligation is to seek truth, and its first loyalty is to its citizens. In this light, I am drawn to health and science journalism for the opportunity to piece together each voice in the pursuit of health, from the laboratory to the street. It is a challenge — but it is also a privilege to chase these stories.

Alyssa A. Botelho plans to intern this summer as a health reporter at The Washington Post.