A night of fun, fellowship — and math 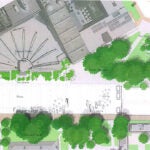 Renewing a hub of Harvard

Sebastian Alvarez squinted in concentration as he played the card game War with another fourth-grader in his classroom at the Gardner Pilot Academy (GPA). Instead of traditional playing cards, the ones in his deck depicted colorful fractions.

“It’s a math game,” he explained. “The person whose card has the bigger fraction wins both cards.”

The point? “It makes math more fun!” he said.

Alvarez was one of more than 150 students and family members participating in Family Math Night at GPA. The card game that he was playing was just one of the hundreds of classroom materials the Harvard Achievement Support Initiative (HASI) has provided to the teachers, after-school staff, and families as part of SmartTALK, a program that supports exceptional learning for children at school and at home.

Playing games that emphasized math skills was just one aspect of how GPA and Harvard support the academy’s students. Principal Erica Herman designed Family Night to rally University and community partners, teachers, students, and families to support students’ long-range academic achievement.  It’s a model that has served the academy well.

Harvard has been a GPA partner for the past eight years, during which HASI staff have provided professional development training and supported family engagement goals through activities like Family Night. HASI is a University program that aids teaching and learning in certain Boston schools through training, professional development, and research-based learning resources and strategies.

But Harvard’s engagement with the academy extends well beyond HASI.  The support includes grants that fund the participation of academy students and families in after-school programs, summer enrichment, adult education, and basic English sessions. After-school students are mentored by Harvard undergraduates at the Harvard Education Portal, and many enjoy field days at Harvard, in addition to scholarships to Harvard camps and activities.

On the afternoon before Math Night, GPA teachers analyzed their students’ math proficiencies and gaps in preparation for MCAS testing. Then, they met with Lisa Moellman, co-manager of HASI, to learn more about the new resources Harvard provided, the hundreds of games and activities for every classroom in the school, from kindergarten through fifth grade.

“It is so important that students have opportunities to experience mathematical ideas in many ways: using objects, making pictures, and playing games with their peers,” said Moellman. “These varied experiences help build a comprehensive, in-depth understanding of the subject.”

Teachers explored the resources and discussed ways to integrate them into their teaching. Then teachers returned to their classrooms to provide some of the new materials to students and their families.

“Any given day at the GPA shows that the whole is greater than the sum of its parts,” said Christine Heenan, vice president of Public Affairs and Communications, which oversees HASI.  “By fostering a range of partnerships that support more than two dozen programs at the GPA, the school is able to deliver holistic support to its students and their families. The multifaceted programs the GPA adopts to engage students and parents during in- and out-of-school times epitomize the kinds of programming HASI supports in all of our partner schools. Harvard is proud to be part of the GPA’s winning equation.”

“Our school is really used as a hub of the community to think about the needs of the child, and the child’s family, in all domains,” said Herman.  “That includes their academic, health, and mental health needs, recreational and enrichment needs, even their family supports, and connecting them to the outside community.”

Students attend traditional classes from 8:30 a.m. to 2:30 p.m., but GPA also provides extended learning opportunities before and after school. Students can start their education at 7:30 a.m., and continue their studies later in the after-school program, which runs until 6 p.m. A third of GPA’s students participate in the after-school program. Parents and members of the community also come to GPA for evening adult education classes, such as English as a second language or advanced computer skills, until 8 or 9 p.m.

“Harvard has a tradition of supporting GPA,” Herman said. Because of the University’s involvement, more students and families are tapping school resources, and the quality of teaching is enhanced.  “Our surround-care teachers are going really deep into understanding their practice. The weekly coaching sessions for our teachers, the tons of resources for professional development, the guest speakers —  HASI is ensuring that quality learning is happening during that after-school time,” continued Herman.

“This is about a belief in what schools should look like,” she said. “It’s about more than learning reading, writing, and math. It’s about supporting kids and families to be happy and healthy throughout their lives. We’re about providing the supports necessary for families to get there.”

What’s the benefit of such in-depth involvement? Karen Mapp, director of the Education Policy and Management Program at the Harvard Graduate School of Education, explored that question in her 2002 publication titled “A New Wave of Evidence: The Impact of School, Family and Community Involvement on Student Achievement.” Mapp found that familial engagement brought extensive, long-term results. Students whose families were deeply engaged in their education not only earned better grades and enrolled in higher-level programs, but also maintained higher graduation rates, and were more likely to enroll in postsecondary education.

In addition to University partnership, outreach efforts and parent involvement in events such as Family Math Night are key factors in the GPA equation for success. Since 1997, the school has raised the parent attendance rate at events from 25 percent to 98 percent in 2011.

For Alvarez’s mother, Jennifer, who sat nearby as he played with his new fraction cards, Math Night provided a chance to spend time with what she called “our family.”

“Everyone knows everyone else,” she said. “I know the teachers, they know me, and I’m very active in the school. He has been in the after-school program for five years, and it has helped him a lot. He’s already taking advanced classes in math, and his reading level is very high. He had the opportunity to go to an advanced school program (at another school), but I’m not taking him out of GPA.”

“Events like Family Math Night enable families to connect what their children are learning in school and give them opportunities to share that learning at home,” said Lauren Fogarty, the director of extended learning time at GPA. “It enables families to see teachers engage with students, give students hands-on ways to engage with math, and then the students go home with a math game the whole family can play. We even make sure to serve dinner for families as part of the event. Harvard allows us the financial opportunity to supply dinner, as well as the math resources for the kids to take home.”

Joan Matsalia, co-manager of HASI, points to the importance of school-University partnerships focused on student success. “Providing a family meal and [sharing] fun math games to take home aren’t simply ‘nice touches,’ ” Matsalia said. “These are tangible and important things that build bridges between school and home, and those bridges are vital for student success.”

“The students are reading about community partnerships and collaborations, and it’s great for them to see that at work,” Mapp said. “One of the reasons we like coming to GPA is their culture of collaboration with families and community members. The staff at GPA knows that family engagement and community partnerships are key to student success. It’s not just something that they do part-time or when they have time. It’s in their strategic goals.”

When Mapp heard of Jennifer Alvarez’s statement that the school “felt like a family,” she nodded. “Exactly. In my research on family engagement, I was looking at schools that do this well,” she said. “When parents say that they feel like members of a ‘school family,’ that’s the tip-off. When I hear people say that, that’s when you know that the school is welcoming and honoring families.”

— Lauren Marshall contributed to this story.