Self-assembly as a guide 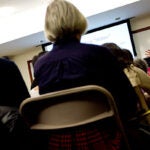 Imagine gently shaking a box of Lego building blocks, and then looking inside to find a series of complete structures.

Self-assembly doesn’t happen in the playroom, but Vinothan Manoharan, an assistant professor of chemical engineering and physics at Harvard’s School of Engineering and Applied Sciences (SEAS), wants to make it happen in the laboratory to treat life-threatening diseases or manufacture useful objects.

“It would be nice to make interesting stuff out of it,” Manoharan said. “It may also be useful to prevent self-assembly in diseases where it matters — and there are lots of diseases, like HIV, where it matters.”

Manoharan explained the physics of self-assembly and its huge potential for the world of biology in a lecture — “The New Science of Self-Assembly: From Living Things to New Technology” — Friday night at the Science Center.

The hourlong talk was aimed at the nonscientist and came with a humorous series of disclaimers that “everything was my own opinion” and not that of his colleagues, that there was a “lot of speculation,” and that “any resemblance to established theories was coincidental.”

Self-assembly, Manoharan explained, is when particles interact with one another and spontaneously arrange themselves into organized structures.

This happens in nature. Proteins self-assemble. So do viruses less lethal than HIV. Scientists such as Manoharan hope that by learning how self-assembly works they can stop deadly viruses in their tracks.

But Manoharan said that despite years of research his team is nowhere near copying the process.

“Nature is doing something we don’t and that is learned through billions of years of evolution,” Manoharan said. “We haven????t been doing it nearly that long.”

Indeed, Manoharan has only been at it 15 years.

His quest began accidentally in Santa Barbara, where his doctoral adviser at the University of California introduced the topic that is now his passion, asking him to create an opal from household paint.

Under a microscope, they look like fat droplets and move in random directions — Brownian motion. That random motion is how self-assembly occurs, Manoharan said. Controlling that is key.

What got him wondering about self-assembly as a way of making things was thinking about the way cellphones are made. The chips inside are about 30 nm in size. As they get even tinier, sprawling factories have to be built to manufacture microscopic silicone chips. That seemed silly.

“Wouldn’t it be great if you could take some silicone and put it into a beaker and shake it for a while and it spontaneously forms a microchip,” Manoharan said. “It seems crazy but that’s what self-assembly means to me.”

After arriving at Harvard seven years ago, Manoharan began working on the problem.

A significant part of it was: Particles left alone crystallize, but they make mistakes and land in the wrong spot.

The trick is getting entropy to work for them. Entropy is a measure of disorder — the higher entropy, the more likely something will be ordered.

His team tried to introduce energy to increase entropy. Manoharan illustrated this by attaching Velcro (representing energy) to orange and yellow ping-pong balls in a clear box containing white balls and shaking it. The orange and yellow balls attached.

Manoharan’s team also has shown that polytetrahedrons have far greater vibrational entropy — 24 times more — than octahedrons. Again, this sheds light on how to make things stick.

“If you control the interactions, so you control which particles stick, you can beat entropy and get them to form,” Manoharan said. “We’ve yet to do this.”

Right now, HIV is treated with medicine that interferes with the virus’ mutations. But that requires multiple rounds of drugs switched rapidly to stay ahead with the mutations. If scientists could unlock self-assembly, Manoharan said, they could get ahead of HIV without drugs.

“If we understand it, we can treat HIV and get to the mutations,” Manoharan said.