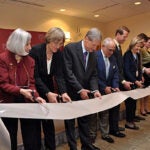 AAAS is one of the nation’s most prestigious honorary societies

Some of the world’s most accomplished leaders from academia, business, public affairs, the humanities, and the arts have been elected members of the American Academy of Arts and Sciences.

Those elected from Harvard this year:

Jonathan B. Losos, Monique and Philip Lehner Professor for the Study of Latin America; professor of organismic and evolutionary biology; curator, herpetoglogy, Museum of Comparative Zoology

One of the nation’s most prestigious honorary societies, the American Academy is also a leading center for independent policy research. Members contribute to academy publications and studies of science and technology policy, energy and global security, social policy and American institutions, the humanities and culture, and education.

“Election to the academy is both an honor for extraordinary accomplishment and a call to serve,” said Academy President Leslie C. Berlowitz. “We look forward to drawing on the knowledge and expertise of these distinguished men and women to advance solutions to the pressing policy challenges of the day.”