Writing the book of cancer knowledge 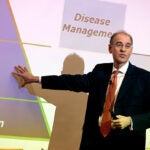 Pondering health, at home and abroad

First volume of the Cancer Cell Line Encyclopedia made public

The goal of cancer treatment is to match the right drug to the right target in the right patient. But before such “personalized” drugs can be developed, more knowledge is needed about specific genomic alterations in cancers and their sensitivity to potential therapeutic agents.

Now an academic-industry collaboration is releasing the first results from a new and freely available resource that marries deeply detailed cancer genome data with predictors of drug response, information that could lead to refinements in cancer clinical trials and future treatments. The Cancer Cell Line Encyclopedia (CCLE), authored by scientists at the Broad Institute of Harvard and MIT, Harvard-affiliated Dana-Farber Cancer Institute, the Genomics Institute of the Novartis Foundation, and the Novartis Institutes for Biomedical Research, is described in the March 29 issue of the journal Nature. In a proof of principle, the researchers also report that genomic predictors of drug sensitivity revealed three novel candidate biomarkers of response.

“We hope that the Cancer Cell Line Encyclopedia will be a preclinical resource that could guide clinical trials,” said Levi A. Garraway, a senior associate member of the Broad Institute, an associate professor at Harvard Medical School and Dana-Farber Cancer Institute, and a co-corresponding author of the paper.

“The CCLE is a public resource that we think will catalyze discoveries throughout the cancer research community,” said Todd Golub, director of the Broad’s Cancer Program, Charles A. Dana Investigator in Human Cancer Genetics at the Dana-Farber Cancer Institute, and a co-author of the paper. “With this initial effort, we have taken some critical first steps. The challenge now is to greatly expand the number of compounds tested across the panel of cell lines.”

The CCLE integrates gene expression, chromosomal copy number, and massively parallel sequencing data from almost 1,000 human cancer cell lines together with pharmacological profiles for 24 anticancer drugs across roughly half of these cell lines. The scale of the project allows greater depth of genetic characterization and pharmacological annotation than previously possible with fewer cell lines. A separate effort by scientists at Harvard-affiliated Massachusetts General Hospital and the Sanger Institute appears in the same issue of Nature.

To accomplish such a feat, the team of scientists relied on the genetics, computational biology, and drug-screening capabilities at the Broad, Dana-Farber, and Novartis. They chose 947 of the nearly 1,200 commercially available cancer cell lines to reflect the genomic diversity of human cancers.

“One of the strengths of the CCLE lies in the number of cell lines it surveys,” said Nicolas Stransky, a computational biologist in the Cancer Program at the Broad and a co-first author of the paper. “We can focus on rare cancer subtypes and still have sufficient statistical power for analyses.”

Cancer cell lines are malignant cells that have been removed from tumor tissue and cultured in the laboratory. Under controlled conditions, they can grow indefinitely.  This near-immortality is an advantage for performing repeated experiments, but it can be a potential pitfall if the cells differ markedly from tumors because they lack typical surroundings. However, with relatively few exceptions, the CCLE cell lines proved to be representative genetic proxies for primary tumor subsets across multiple different cancer types.

Correlating the more than 50,000 genetic and molecular features that emerged from these cell lines created a computational challenge that the scientists met by adapting algorithms to the biological data. They tested this tool against genetic alterations known to predict sensitivity to cancer drugs, and confirmed the value of their systematic approach. Then they applied the predictive modeling methodology to genetic subtypes of cancer known to pose challenges for current treatment modalities.

Armed with this kind of knowledge from the CCLE, researchers may have a much clearer idea of which tumors are most likely to respond to particular drugs before using them in clinical trials, the scientists say. Patients could therefore be selected for such studies based on how likely they are to respond, given the genetic and molecular makeup of their cancers.

“We can ask questions not only about emerging targeted therapies, but also about standard chemotherapy drugs,” Garraway said.  “There may be ways to identify patients who are more likely to respond to conventional chemotherapy versus those who might not. The predicted ‘non-responders’ may be better off trying a different regimen.”

There are more volumes to be written in this encyclopedia.

“From a computational biology perspective, it’s a clean, complex data set that allows many more analyses,” Stransky said. “We are only scratching the surface of what can be done.”

The Cancer Cell Line Encyclopedia project was enabled by a grant from the Novartis Institutes for Biomedical Research. Additional funding support was provided by the National Cancer Institute, the Starr Cancer Consortium, and the NIH Director’s New Innovator Award.