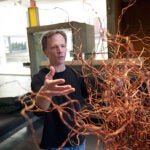 If he builds it, the artists come

Harvard engineer Robert J. Wood has been named one of two recipients of the Alan T. Waterman Award from the National Science Foundation (NSF).

Wood, an associate professor of electrical engineering at the Harvard School of Engineering and Applied Sciences (SEAS) and a core member of the Wyss Institute for Biologically Inspired Engineering at Harvard, shares the honor with Scott Aaronson of the Massachusetts Institute of Technology.

The annual award, the NSF’s most prestigious honor, recognizes an outstanding researcher under the age of 35 in any field of science or engineering that the NSF supports. In addition to a medal, Wood and Aaronson will each receive a $1 million grant over a five-year period for further advanced study.

“Rob Wood’s research is an intriguing example of the growing interplay of biology and engineering, as well as the power of university research both to advance our basic understanding of how things work and to envision potential solutions to real-world challenges,” said Harvard President Drew Faust. “We’re pleased that the NSF has recognized his uncommonly imaginative work.”

Wood is founder of the Harvard Microrobotics Laboratory, which leverages expertise in microfabrication for the development of biologically inspired robots. His team’s project to develop robotic flying insects received an NSF Expeditions in Computing Award in 2009.

A recent aspect of that work resulted in an innovative fabrication technique, inspired by children’s pop-up books, which cheaply and efficiently produces electromechanical devices on the scale of just a few millimeters.

“I’m thrilled that Rob Wood has won this prestigious award,” said SEAS Dean Cherry A. Murray. “Rob is changing the landscape of biologically inspired microrobot and soft-robot design and control and has invented a completely new mesoscale-manufacturing technique.

“Not only does Rob’s research sit at the intersection of multiple disciplines,” Murray added, “it has catalyzed many exciting collaborations.”

Wood is the winner of multiple awards and honors for his work, including in 2008 being named to the TR35 — Technology Review magazine’s annual list of the world’s top 35 innovators under the age of 35 — and in 2010 receiving the Presidential Early Career Award for Scientists and Engineers (PECASE) from President Barack Obama. Wood’s group is also dedicated to STEM education, using novel robots to motivate young students to pursue careers in science and engineering.

“I am thrilled to receive this honor and humbled to be in the company of past winners,” said Wood. “This award will enable us to pursue novel topics in microfabrication and bio-inspired robotics, along with new application areas for our fabrication techniques outside of robotics. Ultimately this award will also provide invaluable material for our outreach efforts.”

The Waterman Award will be presented to Wood and Aaronson (who is also an electrical engineer) at a dinner ceremony held in Washington, D.C., on May 3. Both will also deliver lectures at NSF. “Robert and Scott embody the best in young, bold, and talented researchers in computing,” said NSF Director Subra Suresh. “I have no doubt that these two researchers will continue to have an extraordinary impact on our nation and the world in the years to come.”