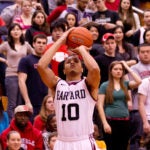 Performers and poets mark the celebration, speak their mind

Ignoring plummeting temperatures and gusting winds, teams of dancers from the Harvard Expressions Dance Company (EDC) shrugged off their winter jackets to perform several hip-hop dance numbers, stopping crowds of students in their tracks outside the Science Center today. The performance celebrated the opening of Women’s Week (March 5-9), a campuswide event that recognizes and celebrates the diverse organizations for women at Harvard.

Co-sponsored by the Harvard College Women’s Center and The Seneca Inc., and with support from the Women’s Cabinet, Women’s Week programming covers a wide spectrum of topics, including a discussion on feminism in the hip-hop industry, a panel on female leadership at Harvard, and meetings on career and leadership opportunities for women.

“Participants and attendees will get an interdisciplinary cross-sampling of the Harvard community,” said Angela Frankel ’14, who organized the kick-off event along with Tara Suri ’13 and Bex Kwan ’14.

“Our goal is to bring new faces to Women’s Week, forge new connections, and inspire students to focus on prevailing gender issues,” she added.

“Having Women’s Week on campus is really important, especially considering Harvard’s history of gender exclusion, and spoken word is an important part of that,” said Church. “Spoken word is about sharing in your own voice — as a woman, as a performer, and as an artist. It’s really about a certain kind of honesty. It’s not just about women power or girl power, but what it really means to be struggling as a woman or student going to Harvard.”

For EDC dancers and co-directors Francisco Hernandez ’13 and DanThuy Chu ’13, participating in the opening ceremony reflected EDC’s dedication to equal opportunity for all individuals. “Women’s Week isn’t just about women,” said Hernandez. “It’s about equality in all things.”

“A number of our members are active in Seneca,” said Chu. “As members, we feel a strong sense of advocacy toward that group. What better way to show our support than through dance?”