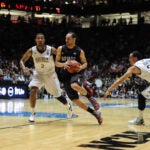 Season to remember comes to a halt

HEMPTSTEAD, N.Y. — Brogan Berry and Christine Clark combined for 49 points as the Harvard women’s basketball team knocked off Hofstra Thursday night, 73-71, to become the first team in Ivy League history to record a win in the Women’s National Invitation Tournament  (WNIT). With the victory, Harvard advances to the tournament’s second round and will now face Temple Saturday at 6 p.m. in Philadelphia.

The Ivy League entered this year’s tournament a combined 0-5 in the WNIT since 2007 when it first earned an automatic bid. For Harvard, it marks the team’s first victory in three tries at the tournament and improves the program to 2-8 all-time in the postseason. The Crimson is also the only program in Ivy League history to record a win in the NCAA Tournament, and did so in 1998 when it became the only No. 16 seed to upset a No. 1 seed on either the men’s or women’s side with a 71-67 victory over Stanford.