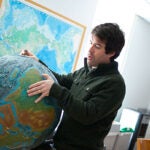 Every day since mid-February, Harvard Forest researcher Joshua Rapp has walked the tree-lined dirt road leading into the 3,500-acre woodland. But instead of lugging the latest high-tech instruments and scientific gadgets, Rapp has been conducting an ancient rite of New England spring: checking sugar maple taps.

This spring, Harvard researchers are joining maple sugar harvesters around the region, collecting gallons of sap from nearby trees. The researchers aren’t looking to sweeten their pancakes, however. They’re seeking to understand better sugar maple biology and the link between the number of seeds a tree sets in the fall and the sugar content of the sap that flows in the following spring.

Maple syrup producers have long known that the amount of syrup varies year to year, but sap flow and syrup production have most often been linked to variations in daytime and nighttime temperatures. Rapp and Harvard Forest Senior Ecologist Elizabeth Crone believe that a key variable in syrup production — the sugar content of the sap — is actually determined months earlier, by the amount of seeds a tree sets the previous fall. The more seeds produced, Crone suggested, the less sugary the sap is because the tree has fewer stored carbohydrates. The less sugar there is, the more sap is needed to make syrup.

Crone is an expert on mast seeding in plant species. Mast seeding is a reproductive strategy in which years of heavy seed production are followed by light seed crops. Some trees, like oaks, are well-known mast seeders. Sugar maples, whose single-winged seeds helicopter to the ground each fall, are not widely known as a mast-seed species, though the trait has been documented in a handful of studies.

Because the sugar maple is a commercial species, Crone has been able to find records on seed and syrup production covering the past 12 years. In reviewing those records, Crone and Rapp confirmed that not only are sugar maples mast seeders — large crops of seeds occur every two or three years — but maple syrup production has declined after heavy seed production and has risen in the springs following light seed production.

Crone and Rapp are particularly interested in this spring’s sap because last fall’s heavy seed crop was the largest mast seeding in the dozen years covered by their records. New evidence would further support their work, which has moved into the phase of investigating the mechanisms behind the mast seeding phenomenon.

There are several theories on why some species mast seed. One theory focuses on resource limitation, hypothesizing that producing many seeds in one year depletes a tree’s resources so they produce a poor crop the following year. Another theory suggests that producing bumper crops followed by poor seed years is a way to control seed-eater populations, allowing more seeds to survive, germinate, and produce the next generation. A third theory focuses on the interplay between the maple’s small green flowers and their pollinators, a native bee slightly smaller than a housefly.

Rapp said the winter’s warmth accelerated Harvard Forest’s sugar season by several weeks. The researchers tapped the trees in mid-February, and sap flow peaked in early March, when in more typical winters it would be just getting under way.

The project won’t end with the spring sugar season. Researchers will be working in the forest’s maple canopy this spring, investigating maple flowers and bees, trapping some to see what kind of pollen they’re carrying. The researchers will again document seed production in the fall, as well as the sap flow next spring. They also are searching for older historical records. Crone said she expects the study to continue for several years to capture several boom-and-bust cycles.

In the meantime, Rapp is putting the Harvard Forest’s kitchen stove to work, boiling up some syrup in an effort that argues that botany, not boxing, is the real sweet science.