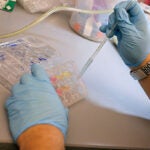 Daniel Eisenstein is investigating the universe, using galaxies as his ruler, seeking to understand the cosmos’s large-scale structure and confirm theories about the dark energy that drives its expansion.

Eisenstein is a professor of astronomy in the Harvard Astronomy Department and at the Harvard Smithsonian Center for Astrophysics. He also heads a major study of the heavens, the Sloan Digital Sky Survey, which is building the most detailed map of the universe ever made.

Eisenstein has devised a new method to determine galaxies’ positions in order to understand more about the universe and to test theories about how it operates. So far, he said, the galactic positions have confirmed findings from the 1990s that we live in a universe that is not only expanding but accelerating, fueled by the invisible force of dark energy.

“One of the ways of studying dark energy is by making extremely precise measurements of cosmological distance,” Eisenstein said.

His work has its roots in the universe’s earliest beginnings, just after the big bang flung matter outward in an enormous explosion. During the first 400,000 years, sound waves propagated through what was basically a dense, hot cloud of hydrogen atoms and scattered photons of light. These sound waves disturbed matter’s even distribution that resulted from the big bang. This perturbation allowed gravity to exert influence by making small clumps of matter into bigger clumps, and large clumps into nebulae — gas clouds that are stellar nurseries — which created stars themselves, solar systems, and the galaxies.

A key characteristic of that clumping, Eisenstein said, is that galaxies tend to be clustered at specific distances, with pairs of galaxies most likely to be separated by 500 million light years.

Eisenstein has used the method derived from that knowledge, called baryon acoustic oscillation, to interpret digital sky images, in which it would be otherwise difficult to tell nearby small galaxies from large distant ones.

“We’re using this characteristic scale of clustering imprinted on the early universe … to infer the distances to sets of galaxies,” Eisenstein said.

The work, Eisenstein said, builds on the research of several notable astrophysicists, including several at Harvard, such as CfA senior scientist Margaret Geller, the late John Huchra, Doyle Professor of Cosmology, who died in 2010, and Robert Kirshner, Clowes Professor of Science.

Much of Eisenstein’s work is done through the Sloan Survey, an enormous collaboration of 600 researchers from 51 institutions that was begun in 1990. Eisenstein, director of the project’s third phase, which runs until 2014, said the survey’s aim is to make the largest, most detailed three-dimensional map of the universe. To do that, researchers are using a dedicated telescope at New Mexico’s Apache Point Observatory to take the most detailed digital pictures ever, on the order of a half-trillion pixels each.

Eisenstein received a bachelor’s degree from Princeton in 1992 and a doctorate in astronomy from Harvard in 1996 under the guidance of Abraham Loeb, Astronomy Department chair and director of the Institute for Theory and Computation at Harvard.

Loeb was effusive in his praise for Eisenstein, saying that he has a rare combination of proficiency in both theoretical and experimental astrophysics.

“Daniel Eisenstein was my first graduate student, and so when he graduated, people were not sure whether to take seriously the superlatives I used to describe his promise,” Loeb said. “A few years later, it became clear to everyone that Daniel has remarkable mathematical skills and physical insights. Although trained as a theorist, he pioneered the use of a new yardstick in observational cosmology. … Daniel is the best current example of a young Enrico Fermi, who promoted state-of-the-art experiments while exhibiting better theoretical understanding than most theorists of his generation.”

Eisenstein joined the faculty at the University of Arizona and became assistant, associate, and full professor of astronomy there before returning to Harvard in 2010.

Eisenstein became interested in astronomy while an undergraduate at Princeton. His first introduction to the subject came in a course during his sophomore year. He wrote his senior thesis on cosmology, the large-scale structure of the universe. He received his undergraduate degree in physics and, when he came to Harvard, was still undecided between condensed-matter physics and astrophysics.

Once you get your head around the remoteness and abstractions at play in astrophysics, the principles applied come from classical physics, Eisenstein said, lending themselves to intuitive insight. In addition, Eisenstein said, he enjoys the blend of disciplines and tools astrophysicists use today — physics, statistics, and computing — not to mention the occasional look through a telescope.

“There are very remote, abstract things, but the principles behind them are largely classical physics,” Eisenstein said. “It’s a fantastic blend.”