The making of Memorial Hall 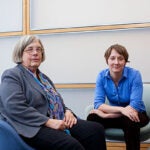 Portrait of the Tea Party

Discussions about a memorial in May 1865

In 1866, Union Army veteran Thomas Wentworth Higginson called the Civil War “that magic epoch of adventure which has just passed by,” an experience so novel that its youthful warriors “were striking out for some new planet. The past was annihilated, the future was all.”

But not all of the past was annihilated. Harvard alumni started discussions about a memorial in May 1865, as the war ended. By December they had chosen a design. Memorial Hall was to be an ornate Gothic Revival structure, with 5,000 square feet of stained glass, a 210-foot tower, intricate slate roofing, and gargoyles sheathed with copper. One critic later called it an “impossible conglomerate of mutations.” Novelist Henry James was kinder, writing in 1888 that the hall — “a great, bristling, brick Valhalla” — dispensed “laurels to the dead and dinners to the living.”

By the summer of 1874, Memorial Hall’s transept was finished, a compact indoor space where 28 tablets memorialized 136 of Harvard’s Union dead. The finished building, Sanders Theatre included, was dedicated on June 24, 1878.

One of the speakers was Civil War hero William Francis Bartlett ’62. Thirteen years before, at a Harvard ceremony for returning veterans, he could hardly speak. But in the new hall, Bartlett found his voice. “Their fame is secure, immutable, immortal,” he said of the honored slain. “We shall grow old and wear out, but they shall always keep for us their glorious, spotless youth.” Bartlett, his health shattered by the war, died six months later.