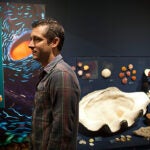 Clams, snails, and squids, oh my!

Stop yawning, America, and get some sleep. It’s more important than you think.

Studies have linked a lack of sleep to everything from higher rates of motor vehicle crashes and heart attack to the nation’s obesity and diabetes epidemics. Insufficient sleep has been linked to memory and learning troubles, behavior problems in schoolchildren, and medical mistakes by doctors and nurses.

With the annual loss of an hour’s sleep coming with this weekend’s shift to daylight savings time, The Forum at Harvard School of Public Health invited a panel of experts on Tuesday to discuss the latest findings from sleep science. Numerous studies show that getting a good night’s rest not only feels good, it is a key part of living a healthy life.

“A good night’s sleep is as important as exercise and diet,” said panelist Frank Hu, professor of nutrition and epidemiology at the Harvard School of Public Health (HSPH).

Sleep provides an important break so that the brain can rest, restore, and consolidate memories, said panelist Susan Redline, Farrell Professor of Sleep Medicine at Harvard Medical School and director of sleep programs at Harvard-affiliated Brigham and Women’s Hospital and Beth Israel Deaconess Medical Center. Sleep’s importance, she said, is illustrated both by the fact that all creatures seem to have a programmed need for sleep and by the fact that being deprived of sleep can be a form of torture.

Human adults typically need seven or eight hours of sleep a night, teenagers nine hours, and children 12 hours. Thirty percent of adults and 70 percent of teens aren’t getting the recommended amounts, Redline said. Those regularly getting significantly less than five hours are at increased risk of diabetes, heart disease, and death. Children who get too little sleep are at risk for behavior problems and academic problems.

Redline and Hu were joined on the panel by Charles Czeisler, chief of the Division of Sleep Medicine at the Brigham and Baldino Professor of Sleep Medicine and director of the Division of Sleep Medicine at Harvard Medical School, and Lucian Leape, chair of the Lucian Leape Institute at the National Patient Safety Foundation and adjunct professor of health policy at HSPH. The event was moderated by Alana Elias Kornfeld, editor in chief of Healthy Living at the Huffington Post. The event was presented in collaboration with the Huffington Post.

Results from the long-running Nurses’ Health Study, which followed 180,000 female nurses for decades, shows that nurses who are sleep-deprived have a greater tendency to ingest junk foods and soda. Over 20 years, nurses who regularly worked the night shift were shown to have a much greater risk of developing diabetes. The study, Hu said, presents a wakeup call across the country for people who work night shifts and their employers.

Employers can benefit from the solution, Czeisler said. Thirty years ago, Czeisler published a study of potash harvesters who worked three shifts. They’d work seven days on one shift, then switch to an earlier shift: days, nights, evenings. In the study, they changed the schedule so that they rotated clockwise, to a later shift — which aligns better with the body’s circadian rhythms — and had the workers keep the same shift schedule for several weeks at a time, with several days off between shift changes. The result, Czeisler said, was a 20 percent increase in productivity, and inquiries to his office from hundreds of other factories.

In this case, Czeisler said, the health of workers improved, but what really drew factories to the table was the increase in productivity.

When it comes to sleepy children, school start times may be an unwitting culprit, said Redline and Hu. Teenagers’ body clocks appear to automatically favor staying up later, leaving less time for sleep if they have to rise for a 7:30 a.m. or 8 a.m. school start.

“Kids are in first-period class when they should be in REM sleep,” Redline said.

There’s growing evidence, Hu said, that a later start time would improve mood and behavior. Czeisler said the benefits might include safety as well, through a reduction in motor vehicle crashes by teens driving to school at an early hour. Twenty percent of high school juniors and seniors are getting less than five hours of sleep a night, Redline said, and those students are twice as likely to be overweight.

Resistance to pushing school hours back comes from a dislike of change to teachers’ contracts, bus schedules, and parents’ need to go to work, panelists said.

Today’s modern devices — from televisions to computers to cellphones — are also robbing children of sleep, panelists said. Children with televisions in their bedrooms spend on average three hours a day on recreational media, much of that at the expense of sleep.

“Get technology out of the bedroom,” Hu said.

Resistance to change intended to improve the nation’s health also comes from an unlikely source: the nation’s physicians. Studies have shown that long hours worked by nurses and doctors — particularly the 30-hour marathon shifts of medical residents — hurt patient care.

Leape said there has been enormous resistance from the medical establishment to reforming work habits and limiting doctors and nurses to eight- or 12-hour shifts. Some steps have been taken to reduce long hours for nurses, with most hospitals limiting double eight-hour shifts, Leape said, but there’s been very little movement to reform physician hours.

Physicians argue that without marathon shifts, residents won’t have time to learn everything they need, that the long hours are required to teach them about continuum of care, that shorter resident hours will mean a manpower shortage, and even simply that today’s physicians trained that way so tomorrow’s should too. Leape discounted all those arguments, pointing to Europe’s 48-hour limit on physicians’ work weeks and saying that some sample programs in the United States have functioned well.

Leape said that it is unlikely that change will come from within the medical community and that it’s most likely to come at the impetus of patient advocacy groups in an effort to reduce the harm done by sleepy doctors.

“The leadership has to come from the ground up,” Leape said.

On Sunday and Monday, after daylight saving time’s one-hour “spring forward,” more than a billion people around the world will adjust to new sleep hours. Studies have shown that there’s a rise in motor vehicle crashes on the Monday after the time change, Czeisler said, and a 5 percent increase in heart attacks during the following week.

“That’s how sensitive our biology is to time,” Czeisler said.