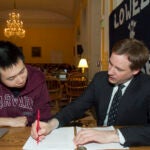 Records are falling rapidly for Harvard track and field competitors

Extending a banner year for Harvard’s athletics, the men’s and women’s track and field teams have been breaking University records left and right. With their season running through May and ending with Olympic tryouts in early June, these runners, long jumpers, and weight throwers show no sign of slowing down.

“Harvard Track and Field has had a rich tradition of success, and to see the current team members rewriting the record books has been remarkable,” said Jason Saretsky, director of track and field and cross-country. “The fact that so many different event areas are at all-time-best levels is especially impressive.”

German-born pole-vaulter Nico Weiler ’13 set a school record on Feb. 11 at a meet against Yale and Princeton by clearing 17′ 4.5″ (5.30m). “My brother started pole vaulting at 14. I’m three years younger than him, so I was about 11 when I started,” said Weiler. “As a little kid, jumping over things is always fun.”

Pole-vaulter Allie Pace ’14 took home second place at the meet, but set a school record, clearing 12′ 9.5″ (3.90m). The Chicago native said she sometimes gets a bit nervous before performing. “It’s a very mental event. The more scared you are, the likelier you are to get hurt,” said Pace. “But I overcome any mental instabilities by repeating a mantra before jumping: ‘I am fast. I am furious. I can do this.’ ”

Success was just what Pace needed after facing a difficult freshman year. “I hit a plateau, so over the summer I worked really hard to get into great shape,” she said. Determined to surpass her own personal record, Pace did just that — and the University’s as well. “By 4 inches,” she said, grinning.

“I definitely had that sense of ‘finally!’ ” she sighed. “Now the only person I have to beat is myself.”

Hurdler Jarvis Harris ’15 broke a University record at the Feb. 3 Battle of Beantown, where he clocked in at 8.11 seconds in the 60-meter hurdle.

“It feels really good being able to contribute to the history at Harvard,” said the freshman from Ama, La. “I broke the record pretty early on in the season, so I’ve got to keep progressing.”

Harris, who began running track when he was 9, was indifferent about hurdling when his coach pressed him to try it at 13, the age where more-advanced track and field activities can be introduced. “Once I was able to do it, I was like, ‘Let’s go!’ ”

He still falls sometimes, he admitted. “My mom hated that — she winced,” he recalled of his high school meets. Because of the team’s whirlwind travel schedule, including an upcoming meet in Houston, a six-hour drive from Ama, his parents may still get to see him in action.

Olivia Weeks ’13 found herself taking second place in Harvard’s records for the triple jump at the Battle of Beantown in early February, and Ben Glauser ’15, took second place in the record books for the shot put at Jan. 28’s Night at the Armory. For them, first-place glory is close, very close.

For sophomore Adabelle Ekechukwu, who holds the second-place record for weight throwing with a distance of 18.54, beating herself is the real objective. “That’s my goal for each upcoming meet,” said the neurobiology concentrator. “It’s reachable; I just hope I can perform,” she said.

The team is on the cusp, they know. “We’ve definitely grown a lot from my freshman year. We’re starting to realize that we’re really good, and realizing our own potential,” said Weiler.

“We’re eager this season,” added Harris. “And hopeful. We’re looking for a better season than we’ve ever had before. We’re hungrier.”

Off to the races