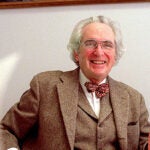 Ronold Wyeth Percival King was born on September 19, 1905, in Williamstown, Massachusetts, where his father was a professor of German at Williams College.  He received a B.S. degree in physics from the University of Rochester in 1927.  Under a German-American Fellowship, he studied in Munich and then received a master’s degree in 1929 from the University of Rochester and earned a Ph.D. in 1932 from the University of Wisconsin.  After two more years at Wisconsin doing research, King moved to Lafayette College in Easton, Pennsylvania, to serve as an instructor in physics.  In the spring of 1936, Professor E. L. Chaffee, who headed a group in Communication Engineering in the Graduate School of Engineering at Harvard, searched out Dr. King as successor to Professor G. W. Pierce, who was retiring. In 1938 King returned from a year-long Guggenheim Fellowship in Germany to become an instructor in the School of Engineering at Harvard.  He retired from Harvard as Gordon McKay Professor of Applied Physics in 1972, but stayed many years beyond, remaining active and productive until after his one-hundredth birthday.

Over the course of his career King produced 12 books and more than 300 journal articles in the field of applied electromagnetics in specialized areas related to antennas.  His lectures and publications make the word “thorough” seem like a gross understatement.  Fortunately he usually began with a physical description of the problem followed by a rigorous theory containing a large variety of symbols.  His giant and intimidating volume, The Theory of Linear Antennas, was used to train most of his students.  Without taking the antenna course, AP 234, you could never be a true King antenna person.  He could spend an entire lecture explaining a concept that others would dash off in five minutes.

In many areas of electrical engineering, Maxwell’s equations would form the basis for King’s theoretical treatment.  Generally he would add experimental results carried out by his students. Many of his journal publications were co-authored with the students and, in an efficient process, were ultimately incorporated into his books.  Other areas to which King made major contributions were antennas over and in earth and water and the biological effects of electromagnetic radiation.  During the war he taught courses in the Harvard Radar School and pre-Radar School.

According to King himself, his greatest achievement was the 101 graduate students who wrote their Ph.D. dissertations under his guidance, including one father-son pair: John and George Fikioris.  His large body of students referred to him as “Professor King” even after they themselves became professors.  In spite of this formality, his Ph.D. students enjoyed a relationship with him that was both familial and collegial.  Students regularly had lunch with him at the lab and were invited to dinners at his house in Winchester.  He took equal interest in outstanding students and those in need of help of any kind.  His students honored him with the Golden Dipole Award at his retirement dinner in 1972 and celebrated milestones with him regularly up to and including his one-hundredth birthday.

King received many awards for contributions to research and education.  In 1984 he received the IEEE Centennial Medal; in 1986 the Harold Pender Award from the Moore School of Electrical Engineering of the University of Pennsylvania; in 1991 the IEEE Distinguished Achievement Award of the Antennas and Propagation Society, the citation for which stated: “To Ronold W.P. King for over a half century of outstanding contributions to the field of electromagnetics particularly in the area of linear antennas; for the exemplary standards in research and teaching and, above all, for a lifetime of dedication to his students.” One award that made him particularly proud was being elected to the Bavarian Academy of Sciences.

King married Justine Merrell in 1937, and their son, Christopher, was born in 1941. After Justine’s death in 1990, he married Mary Govoni in 1991. King’s personal life is hard to separate from his public life as professor and researcher.  He spent most of his summers, from boyhood on, at his family’s oceanfront cottage in Rockport, Maine.

It was a classic wooden cottage with a wood stove that kept his family from freezing on cold and foggy Maine days.  When he was an undergraduate he took on the job of wiring his family’s farm in Waldoboro, Maine.  He designed the systems himself and bought all the parts from Sears Roebuck.  No soldering in the walls was allowed, so he had to have exact lengths to put in conduit.  With the help of his younger brother, Don, the job took two summers to complete, but he said, “It made electricity very real.  In a small way it was the beginning of my long career in electromagnetic theory.”  When he observed that boats often had a hard time navigating Rockport Harbor in the fog, he devised and published a paper on a beacon antenna array system to guide the boats.

Much can be said of Ronold King’s life work: his energetic commitment to his 101 Ph.D. advisees; his skill at conveying a deep physical understanding of a problem; his extraordinary analytical abilities and experimental prowess.  King’s success as a teacher also benefited from a unique talent for choosing words and crafting sentences to communicate complex and subtle ideas.  His writing was as precise as his science, and both were exceptionally deep and elegant.

In addition, Professor King’s industry was truly remarkable.  How many individuals reach the age of 90 and have 30 more scientific, peer-reviewed papers and one more comprehensive technical book yet to write and publish?

Professor King’s students and colleagues have greatly admired his long life and many accomplishments.  Most complimentary of all, many have modeled their lives after his fine example.