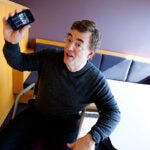 A therapist at your fingertips

Researchers seek clues to atmospheric changes ahead of animal life

For more than a decade, scientists have dismissed claims that examining carbon-rich rocks could yield clues to the atmospheric and oceanic conditions on Earth hundreds of millions of years ago, but now researchers at Harvard are challenging that belief, and suggesting that data gleaned from the rocks sheds light on how changes in the atmosphere and oceans helped set the stage for the emergence of animal life.

In one of the largest studies of its kind, described in the March 14 issue of Nature, a group of researchers led by David Johnston, assistant professor of Earth and Planetary Sciences, analyzed hundreds of samples of carbon-rich rock collected from sites in Canada, Mongolia, and Namibia. Their findings show that carbon isotope records from the mid-Neoproterozoic era — between 717 million and 635 million years ago — can be “read” as a faithful snapshot of the surface carbon cycle.

Based on the amount of carbon isotopes buried in those rocks, researchers hope to better understand critical atmospheric changes — particularly in the level of oxygen — that took place in the period just before the emergence of animals.

“Hopefully, this will put the conversation back on the table,” Johnston said. “For the last 10 or 15 years, people hadn’t been paying a great deal of attention to these records and what they could be telling us.”

“These carbonate carbon isotope records are faithful records of Earth surface processes,” he continued. “Where our findings differ from earlier research is that we have learned that the environmental system is far more dynamic than initially thought, so the simple models that were used to describe what these records meant for the environment don’t necessarily hold.”

Much of the resistance to using carbon records to examine the ancient atmosphere, Johnston said, can be chalked up to ideas and alternative models forwarded a decade ago.  It then became widely held in the scientific community that the straightforward approach taken by Johnston and colleagues was invalid.

The notion of using carbon isotope data to deduce atmospheric conditions millions of years ago first emerged in the mid-1980s, when a series of studies uncovered huge fluctuations in carbon records. Based on those findings, researchers initially concluded that the era was marked by a large increase in atmospheric oxygen, a critical element postulated to be related to the evolution of the first animal life.

As more detailed research was released in the late 1990s and early 2000s, however, scientists began to poke holes in what once looked like a relatively simple story.

Among the first challenges was the “large dissolved organic carbon” model, a theory that posited that the chemical composition of early oceans was dramatically different from the oceans of today. With vast amounts of organic material dissolved in the oceans, proponents of the theory said, it is impossible to compare the carbon cycle of today with that of 650 million years ago.

Other researchers, meanwhile, suggested that isotope records were unreliable because a process called burial diagenesis caused the rocks to be “overprinted” with carbon as various geologic processes took place over millions of years.

“These two models were put forward, and as a result, people lost all confidence in these carbon isotopes because they thought they were telling us something very different from what we had hoped,” Johnston said. “What we found is that there was so much dogmatic thinking around these ideas that we needed to more or less debunk the other models before we could return to the idea that these records are primary.

“To do that, we built very high-resolution data sets, so we had a more precise snapshot of the environment,” Johnston continued. “What we found is there is actually a robust and unifying picture that we could apply to all the data, both that which fits our model and that which fits these other hypotheses.”

Though their findings, at first glance, seem to support the earliest studies of carbon records, Johnston warned that that connection between carbon isotope levels in the rocks and oxygen levels 650 million years ago isn’t as clear-cut as first imagined. Johnston and colleagues are now working on new methods to calculate oxygen levels based on the carbon records, and hope to publish their research this year.

“Understanding the different dimensions of these systems is critically important,” he said. “The way I look at it: Once animals evolved, the world was never the same again. They fundamentally changed the way this geochemical cycling happens.”

“The question that keeps me going is whether or not there was a chemical change that preceded them, that opened the environmental niche that they came to fill, or if it was just some timescale that it took to evolve the features necessary to fill that niche.”