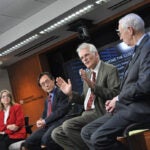 A new study by Harvard School of Public Health (HSPH) researchers has found that red meat consumption is associated with an increased risk of total, cardiovascular, and cancer mortality. The results also showed that substituting other healthy protein sources, such as fish, poultry, nuts, and legumes, was associated with a lower risk of mortality.

“Our study adds more evidence to the health risks of eating high amounts of red meat, which has been associated with type 2 diabetes, coronary heart disease, stroke, and certain cancers in other studies,” said lead author An Pan, research fellow in the Department of Nutrition at HSPH.

The study was published online in Archives of Internal Medicine.

The researchers, including senior author Frank Hu, professor of nutrition and epidemiology at HSPH, and colleagues, prospectively observed 37,698 men from the Health Professionals Follow-Up Study for up to 22 years and 83,644 women in the Nurses’ Health Study for up to 28 years who were free of cardiovascular disease and cancer at baseline. Their diets were assessed through questionnaires every four years.

Among specific causes, the corresponding increases in risk were 18 percent and 21 percent for cardiovascular mortality, and 10 percent and 16 percent for cancer mortality. These analyses took into account chronic disease risk factors such as age, body mass index, physical activity, and family history of heart disease or major cancers.

Red meat, especially processed meat, contains ingredients that have been linked to increased risk of chronic diseases, such as cardiovascular disease and cancer. These include heme iron, saturated fat, sodium, nitrites, and certain carcinogens that are formed during cooking.