Portrait of the Tea Party 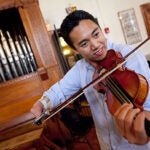 In tune, without limits

They came out of the woodwork almost overnight. Angry, indefatigable, they were a burgeoning faction gaining strength in 2009, and their mission to undercut new President Barack Obama was clear. In the mad dash toward the 2012 elections, the Tea Party has grown from a grassroots movement into a full-fledged political force.

Theda Skocpol, the Victor S. Thomas Professor of Government and Sociology, and Vanessa Williamson, a third-year Ph.D. candidate in the Graduate School of Arts and Sciences, have spent countless hours investigating the party’s rise, traveling the country interviewing members of this potent new enterprise for their new book “The Tea Party and the Remaking of Republican Conservatism.”

“The thing that was new about our research is that we actually sat down and talked to Tea Party people,” said Skocpol, who, along with Williamson, attended local Tea Party meetings in New England, Virginia, and Arizona. “You learn a lot more about the whole person because the first question we’d ask would be ‘Tell us about yourself, and how you got involved with the Tea Party.’ ”

The Tea Party, made up of “mostly older, white conservatives in the middle class,” said Williamson, has grown enough that it can sway midterm elections and pressure politicians to embrace more right-leaning policies.

“One of the strongest emotional reactions we heard was a generational concern. Again and again, we heard that these people felt their country was being taken away from them — this feeling that young people, particularly minorities and unauthorized immigrants, and other people that just seemed different to them, were taking advantage of government services and not working as hard as they had,” said Williamson. “As older people, they were recipients of programs like Social Security and Medicare; they felt that those benefits they had earned, while there were other people who hadn’t earned those benefits who were somehow getting ahead unfairly.”

Theirs is a fear-based uprising, said Skocpol, hinged around the 2008 election. “They find the moment of Obama’s presidency and the things that were being done by the Democratic Congress very scary, and we wanted to know a lot more about what exactly was so scary,” said Skocpol.

“Obama is really at the center of a vortex of concerns,” added Williamson.

Tea Partiers perceive Obama not just as black, but as not actually American, said the authors, because of his foreign-sounding name and his foreign-born father.

This quest to preserve what is authentically “American” is essential to the Tea Party members, and so immigration policy is at the forefront of their anxieties.

“Furious about immigration, they think a lot of it is illegal, more so than it really is, and they want the government to crack down, both at the border and in terms of denying access to benefits and college loans. They’re completely against the DREAM Act and spending tax money sending immigrant children to college,” said Skocpol.

“When I asked some members what our immigration policy should be, they said it should be a 12 million-passenger bus back to Mexico,” said Williamson. “It’s a hard-line stance.”

But the authors said they genuinely liked their interviewees, and sent them copies of the book, which “presents them in a full human light,” said Skocpol. Even though many of those interviewed subscribed to some strange conspiracy theories — like the idea of “death panels” in the Affordable Care Act, boards they imagined, incorrectly, would decide which patients live and which die — “we found most of them in person to be intelligent and often very pragmatic about politics. They just had some crazy, mistaken ideas about the content of policy.”

As for the November election, it’s going to be close, Skocpol and Williamson agree. “I do think Mitt Romney will be the nominee, and I think it will be a nasty election. Romney is perceived as the most moderate, but he’s signed on to the full menu of Tea Party-backed priorities. They’re being backed up by some very wealthy lobbying forces who have a very clear policy agenda they’ve been pushing for a long time, and they intend to push it through,” said Skocpol.

She noted that Romney isn’t the favored Republican candidate. Tea Partiers simply don’t trust him, but they will support him as the nominee who can beat Obama.

“It’s probably going to be one of the most important elections in American history because it’s going to determine whether we have things like health care, Medicare, Social Security, college loans. … Tea Partiers want to get rid of college loans and college grants for low-income students,” she added. “This is a very important moment.”