On climate issues, look to states 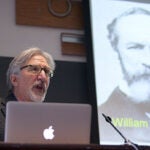 Circumstances that color our perception

Creative solutions to global warming are rising from below

The head of California’s air pollution regulatory board said Monday (Feb. 27) that with climate change action stalled in Washington, D.C., the states are taking the lead in creating ways to reduce carbon emissions.

Mary Nichols, chair of the California Air Resources Board, discussed that state’s air pollution regulations, which include a cap-and-trade policy adopted in 2006, as well as incentives for cleaner vehicles, energy efficiency, and use of renewable energy sources.

“Where has policy leadership gone?” Nichols asked. “I think it’s gone to the states.”

Nichols addressed “California’s Low Carbon Energy Future” during a Future of Energy talk at Harvard Law School’s Austin Hall. The event was sponsored by the Harvard University Center for the Environment (HUCE) and Harvard Law School. Nichols was introduced by HUCE Director Daniel Schrag, the Sturgis Hooper Professor of Geology and professor of environmental science and engineering.

Nichols, who served in the U.S. Environmental Protection Agency under President Bill Clinton, derided climate-change deniers, echoing California Gov. Jerry Brown’s characterization of them as “a cult” even as she acknowledged that critics have been remarkably effective in injecting doubt into the national discussion on the issue.

Despite such efforts, 2011 was the 11th-warmest year on record, and was marked by extreme weather events that cost insurers billions of dollars, Nichols said.

California’s 2006 legislation made carbon and other greenhouse gases a commodity in the state and committed the state to reducing emissions. The legislation requires that 33 percent of consumer energy demand be met by renewable energy by 2020, Nichols said, along with a 10 percent reduction in the carbon intensity in transportation fuels.

California also adopted advanced clean air standards for vehicles, including electric and fuel cell models, with the aim of halving emissions and doubling fuel economy by 2020. The improved fuel economy would save consumers about $4,000 over the lifetime of a vehicle and cut oil imports by a third. The aim, Nichols said, is to give consumers several low-emission alternatives and let them pick the winner.

“We truly don’t know yet what the winning combination of vehicles and fuels will be,” Nichols said.

Nichols attributed the waning momentum behind climate change legislation to the nation’s economic struggles and predicted that momentum will pick up as the economy improves. California’s residents, she said, do care about the environment. Although scientists caution that climate change can’t be traced to a single weather event, Nichols said that people don’t want it to become hotter and windier, and see their favorite beaches washed out by rising seas.

Nichols dismissed industry objections that the emissions goals can’t be reached. The industry has repeatedly claimed that technology didn’t exist to achieve environmental goals, but has achieved them every time, Nichols said. The Clean Air Act alone has prevented an estimated 360,000 premature deaths and created benefits that outstrip costs of implementation by 30 to 1, Nichols said.

Nichols hailed Massachusetts as another state that has taken it upon itself to pass climate-change-related legislation and said other states can learn from the two states’ experiences.